The central idea behind the long term draft analisys I've been doing on the internet is that while the NBA draft is on average a coin flip we can, through a robust examination of the numbers, greatly increase our odds of successfully identifying good player. The table below illustrates that point.

This is why I take the time each year to write in depth draft previews (here, here, here and here for 2014). This is why I keep track of the results over time.

The simple and probable belief that exceptional players at lower level professional leagues (be it pro-bono work in the NCAA, the Euro league or dleague) are more likely to excel in the NBA .

What I am simply trying to do is to clearly identify exceptional players that reduce the level of risk of a draft pick. We can't really know in the end how good or bad a player is going to be much like we can't really know the outcome of a game beforehand or of the roll of a die. We can however make reasonable assumptions as to the level of risk and the probability of success.

That is what I'm going to grade in this post. How did each team do, based on the information available, at maximizing the value of the draft capital (i.e. picks) that they had available to them. I will look at the data. Look at every team's picks and provide an assessment as to the likely return on their draft investment.

I will also make some, hopefully, insightful and funny commentary. Your milage may vary. 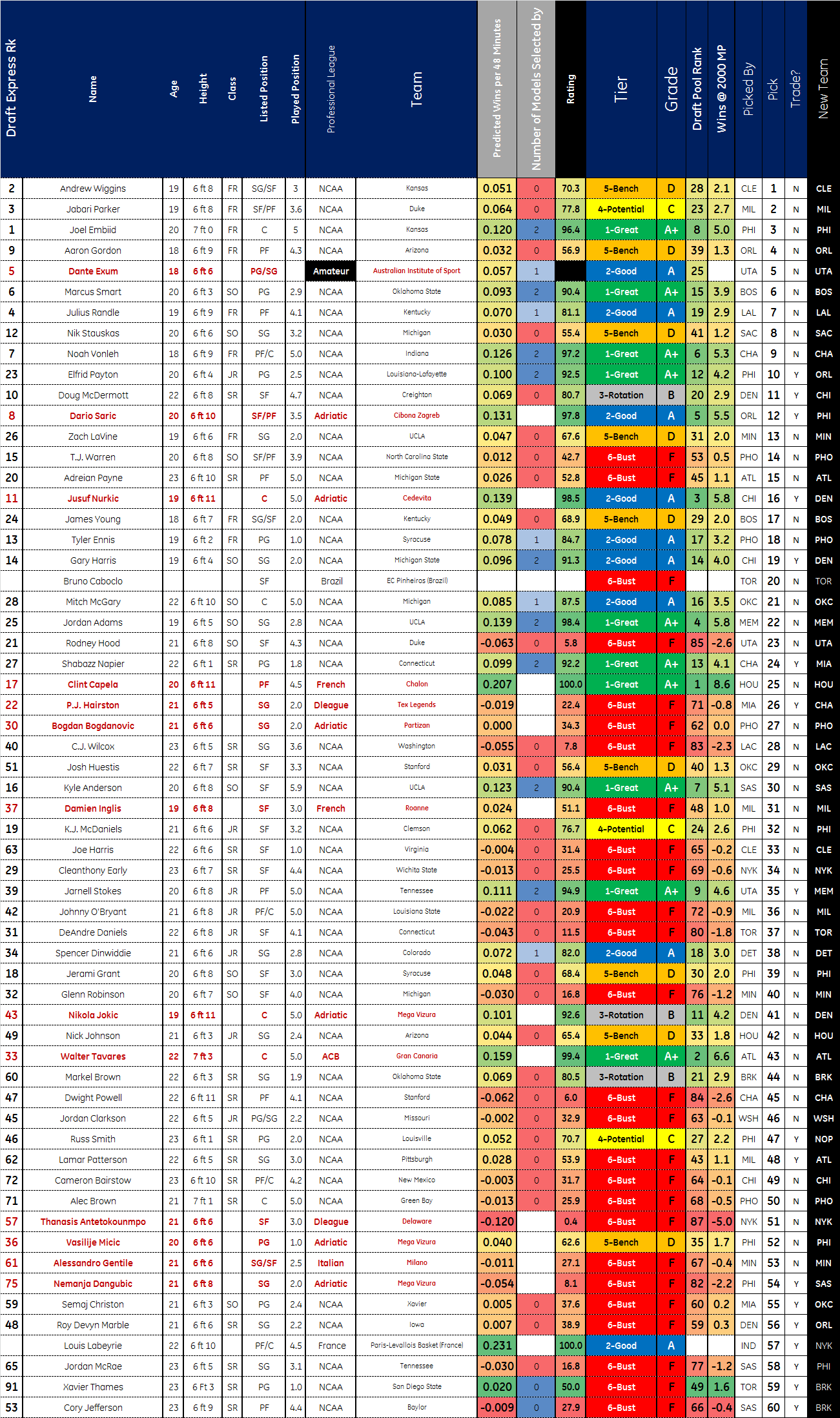 That is your quick graphical summary of the 2014 NBA draft provided for reference. It also provides a good starting points for our grades.

You'll note that four teams in the NBA completely traded out of this draft (the Mavericks, Warriors, Pacers and Trailblazers) . The Warriors and Trailblazers are pretty set with good, young franchises with a plan and decent rosters so we will not fault them for the pass. The Pacers had some serious deficiencies that will only be agravated in this offseason thru Free Agency. They lack depth. The Mavericks seem to have a free agent plan but the expiration date on their roster keeps getting closer and closer.

I'd rate them as Warriors/Trailblazers pass, the Pacers fail and Mavericks incomplete until I see their roster after free agency.

Let's go thru the remaining 26 alphabetically. 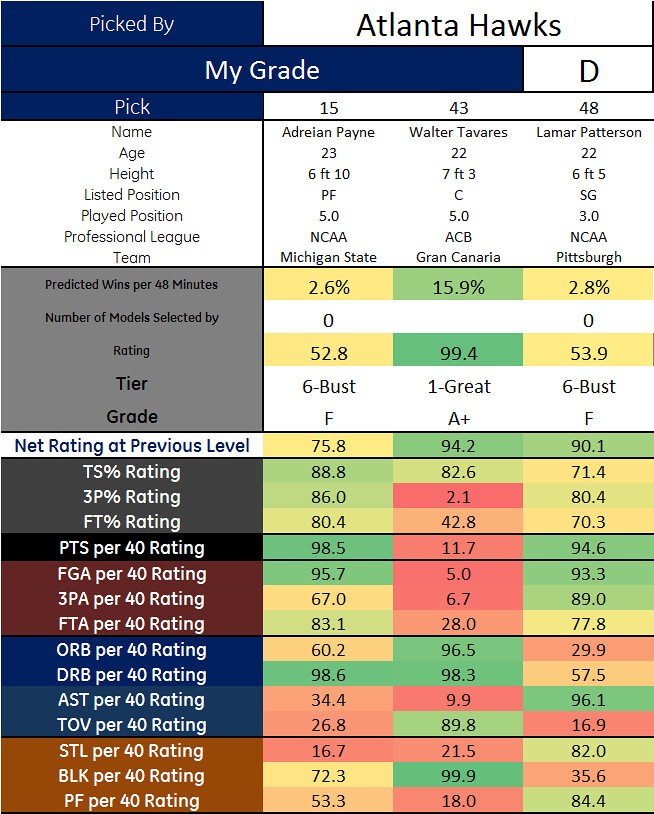 The Hawks wasted the 15th pick on a 23 year old that couldn't crack an 80 rating in the NCAA. I do like their second round. I really like Walter Tavares as prospect. Great ACB numbers. Great value for a second rounder. Best 7 plus footer on the board at that point. Patterson was at least top 10% in college and has a shot at making the roster.

Tavares and his size get them a passing D but just barely. 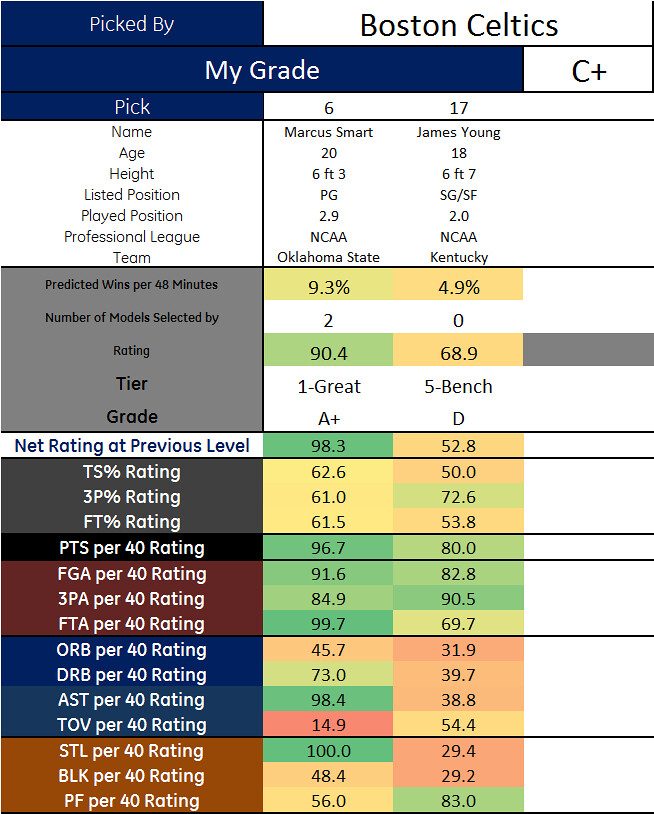 As a Celtics fan, this was very much a yes! followed by OH NO! as captured in our video podcast of the draft. Smart projects as a great player. I do worry about having him and Rondo together but it'll be better than Avery Bradley. I almost killed something when they picked Young. The last thing the Celtics needed was another wingman who can't shoot, pass, steal, block or rebound.

It's not like we were playing our Power Forward completely out of position at center. Capela was right there. I begrudgingly give the Celtics a C+ but I'm not happy. 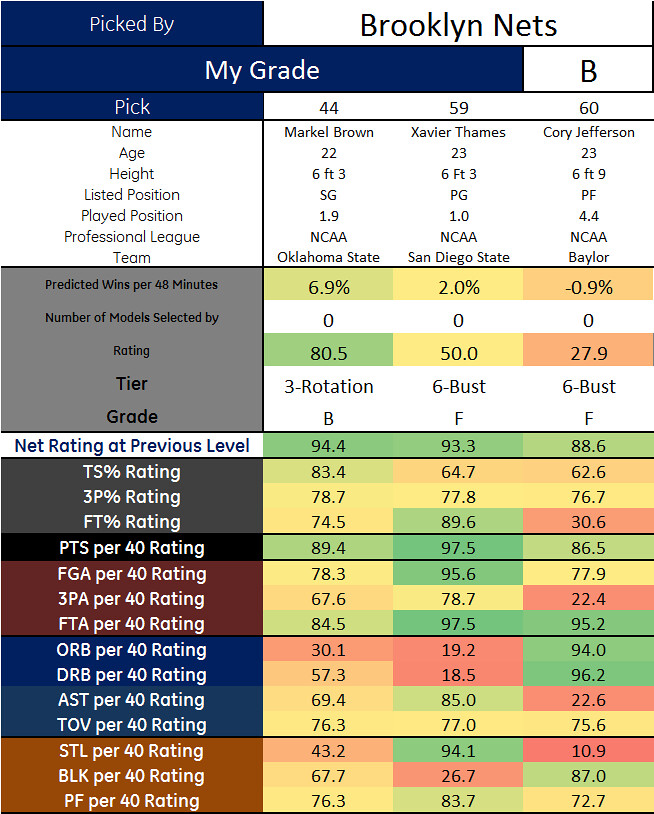 A B? For the Nets? Really? Yes really. The Nets walked into the draft with zero picks, bought themselves three second rounders and proceeded to three players with a decent change at catching on a roster. Markel Brown and Xavier Thames both are in the top 10% of the NCAA population. Cory Jefferson can get to the line and rebound. For the draft capital they spent, the Nets look to have gotten something. It's enough for me to curve them to a B. 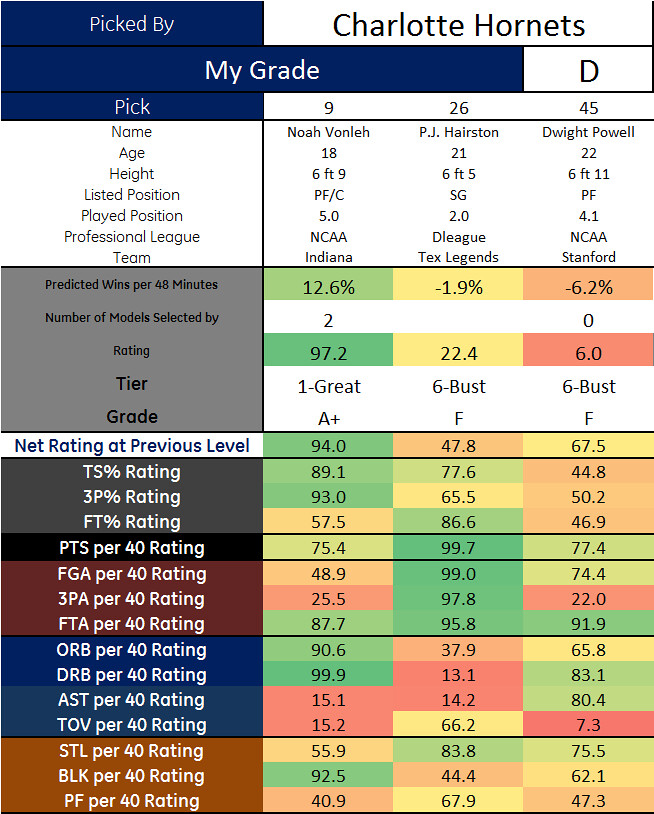 The Hornets behavior on draft night inspired this tweet:

Heat fans loved that MJ did them a solid and drafted Napier for them.The fact that they took back P.J Hairston who was downright terrible in the d-league (high usage low production guy is not what the Hornets need). was the questionable icing on the crap cake that was that trade.

Powell is not even worth mentioning. Hornets did nail the Vonleh pick. A+ prospect that should be fun playing next to Al Jefferson and he has some range. He's the only reason I'm not flunking Charlotte and giving them a D. MJ, greatest player of all time does not mean great owner. 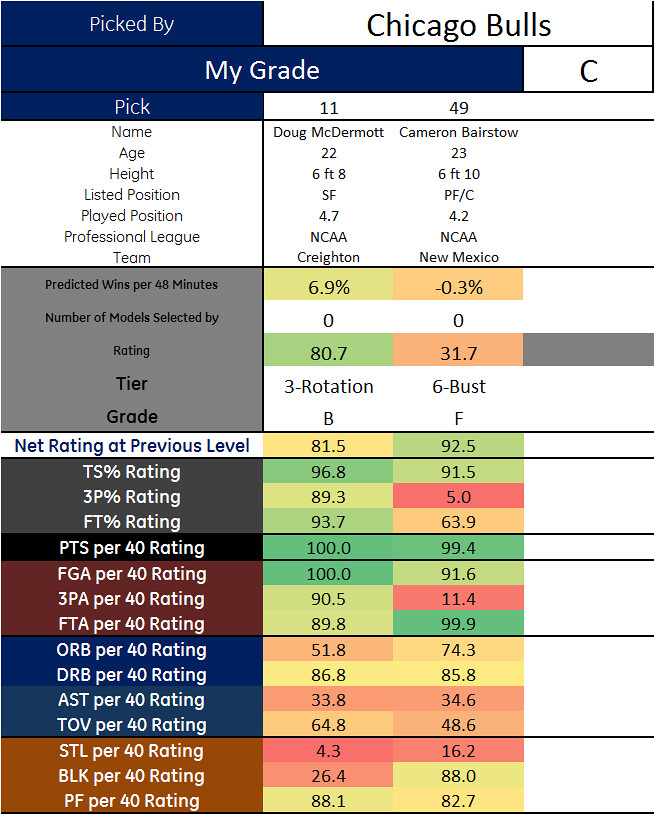 The Bulls took McDermott with the 11th pick. The models do not love him but project him to be a borderline starter. He can score and shoot efficiently, it's the other areas of his game that were lacking. Definitely looks to have at least one NBA level skill. Cameron Bairstow is nothing to write home about.

I give them a C for average if not great return. 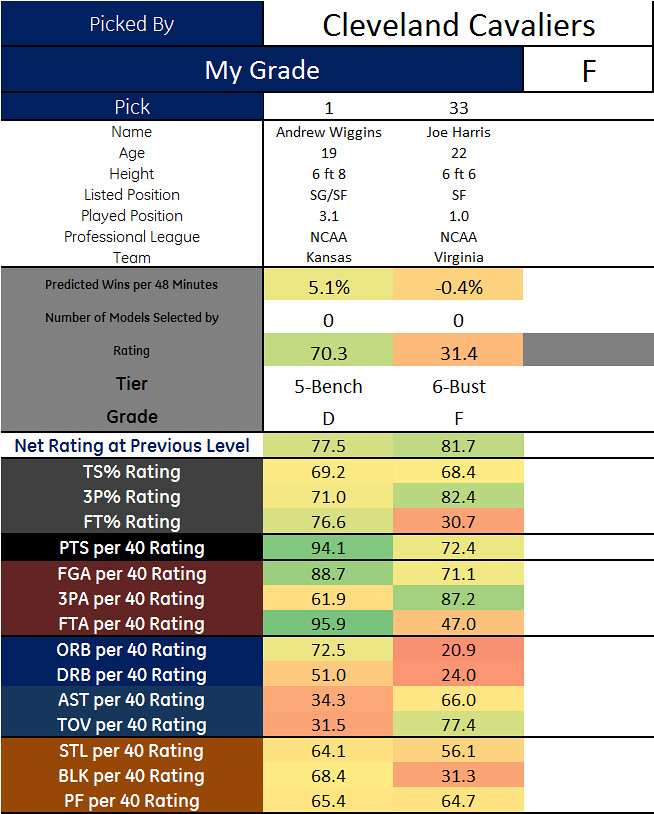 With the number one pick, the Cavaliers select a player not liked as the number one pick by basically any statistically based model. Look, I'm not saying that Wiggins won't be an NBA level starter at some point but based on his NCAA numbers he's not there yet and he might not be anytime under his rookie contract. I think he will score a ton but that'll be down to opportunity. I would have swung for the fences and taken Embiid. Joe Harris will be lucky to be a twelth man.

I have to give the Cavs an F. At least, they're consistent. 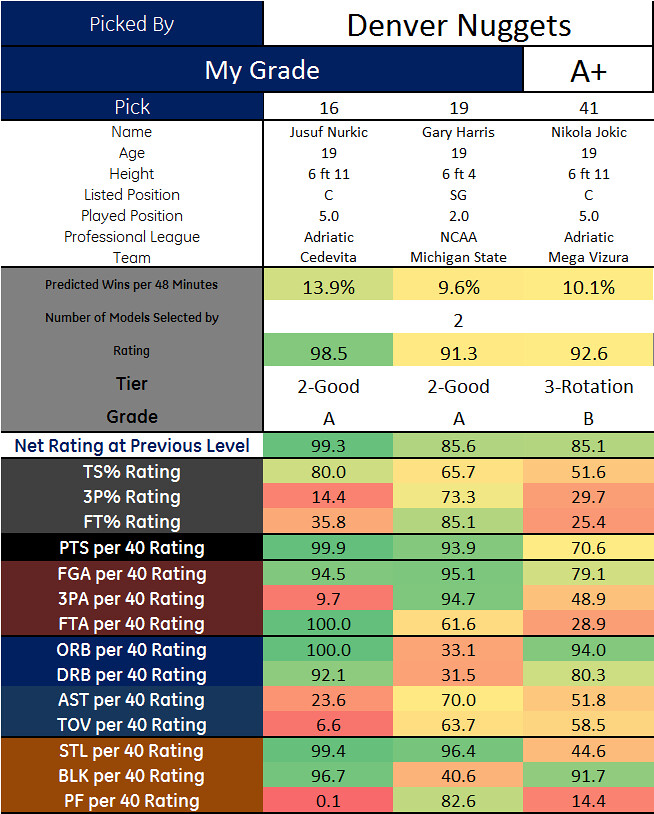 The Nuggets sure have gotten smart about drafting. They didn't quite win the night but they went 3 for 3 with their picks selecting solid talent across the board. Given their recent track record of drafting excellent talent ( Lawson and Faried), Denver seems to have a solid handle on draf night.

Nurkic and Jokic are excellent young Euro bigs with good track records in Europe. Gary Harris was a high volume three shooter although with some accuracy concerns (could be the volume or could be the youth).

All in all an excellent haul earning them an A+. 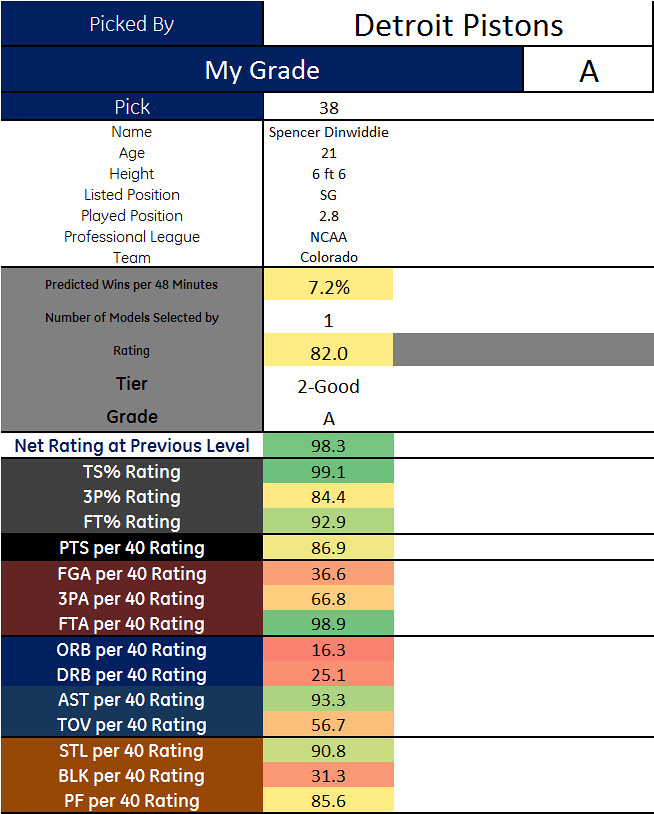 The Pistons had one shot. They used it well I think. A for them for finding an accurate shooting SG that gets to the line and passes well. Stan Van Gundy will put him to great use. 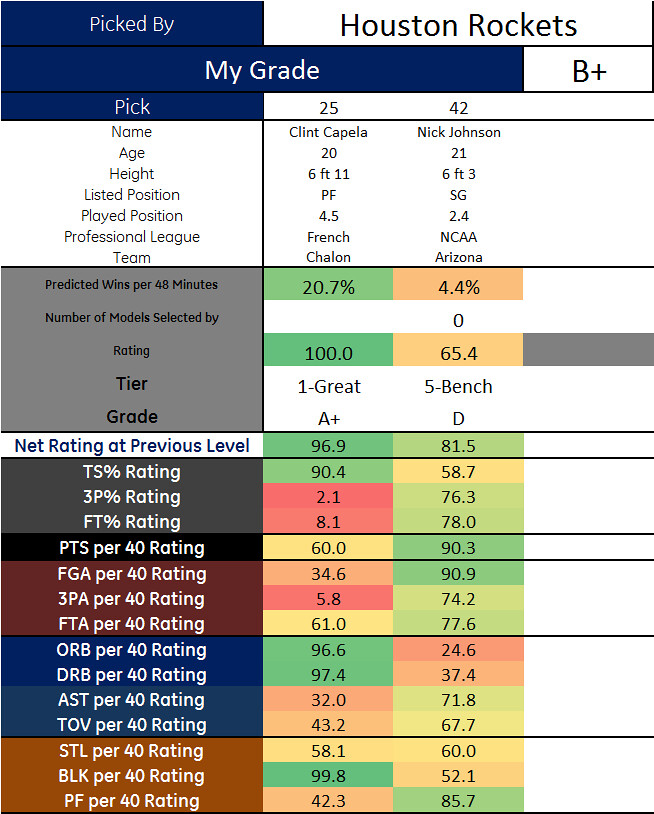 The Rockets, much to my annoyance, got the best propect on my board in Capela. I have no clue how the Rockets were able to add a hgh flying, 20 year old productive seven footer who can block shots to play next to Dwight Howard. The smart GMs in the league in general (Spurs, Grizzlies, Heat, Rockets and Nuggets) did a real number on the rest of the NBA.

Their second round pick was a bit ho-hum so the Rockets final grade falls to B+. Or it fell because I'm annoyed at Mr. Morey for a great draft. 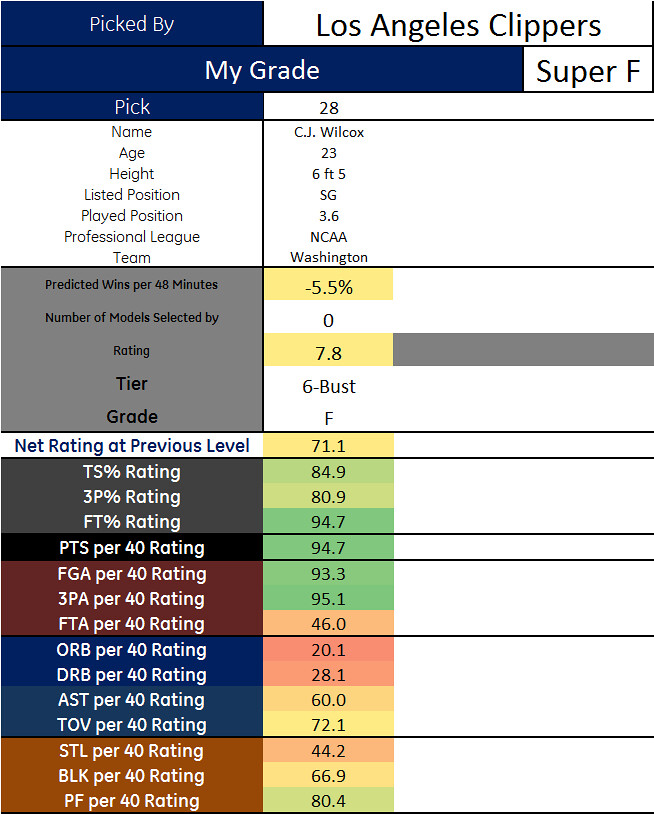 The Clippers, whose biggest weakness is the lack of any big man depth and who have an insane logjam at the wing, went out and drafted a shooting guard. Not only that, but in C.J. Wilcox, they drafted a Shooting Guard that barely cracked the top 30% for the NCAA as a 23 year old senior and had the second worst projection of any first rounder as per our model.

They also passed on a far superior wing player who went to the team they have to get thru. The Clippers don't just get an F, they get a Super F for misunderstanding their roster, helping their rivals and drafting poorly. 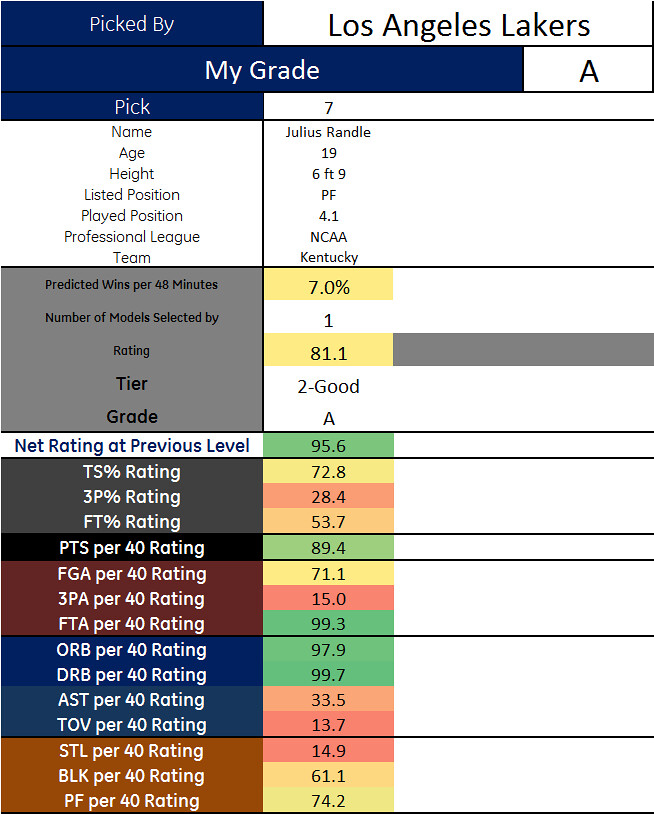 The Lakers went out and got Julius Randle who as a 19 year old was dominant in College and did it on a loaded team. These are all excellent indicators. I love this pick for them, they get a nice, clean solid A from me. 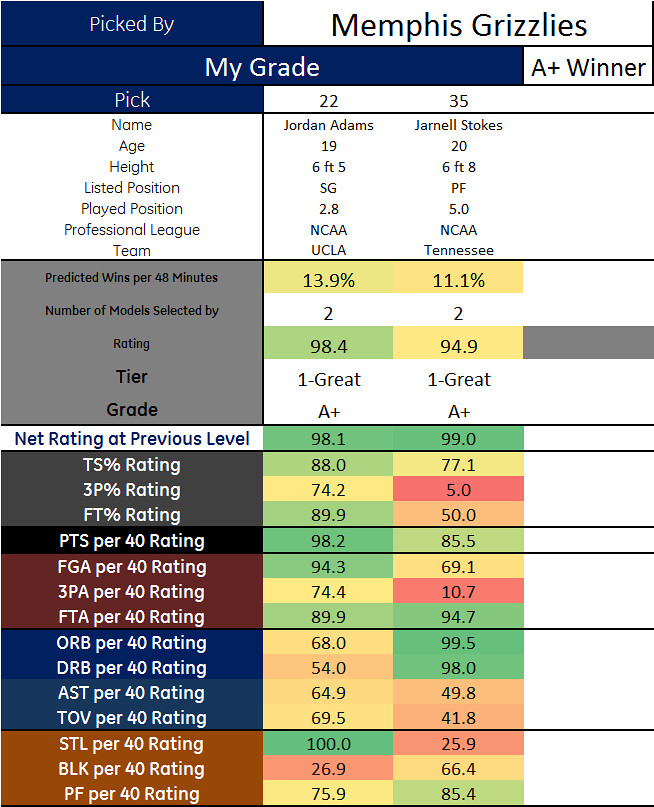 Memphis won the draft for me. In Jordan Adams, they get a 19 year old that was increadibly productive on a loaded UCLA squad and who projects highly. More importantly, he helps adress a roster weakness. Stokes is another super productive player to plug into their roster.

I would say of any team, they spent the draft capital on hand in the wisest possible manner. A+ and head of the class for them. 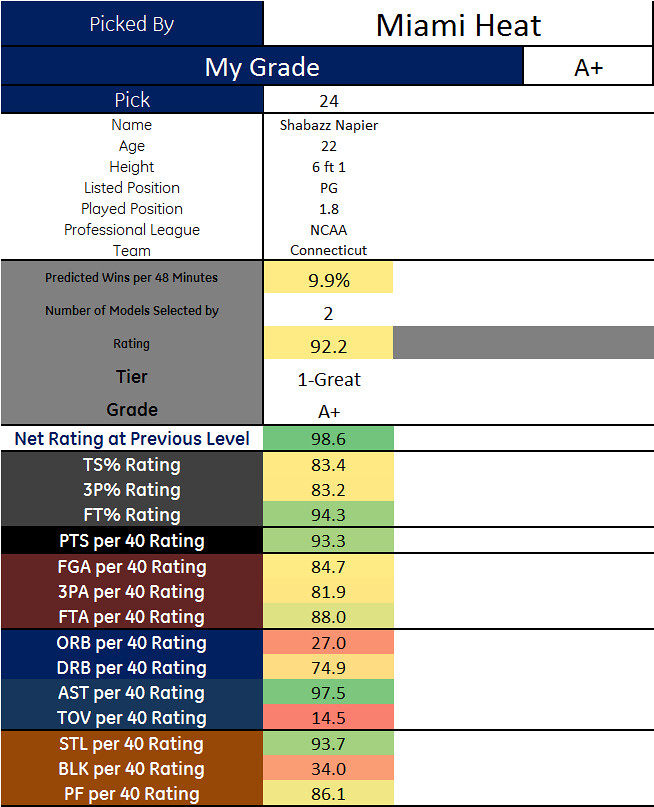 The Heat not only adressed one of their glaring areas of weakness, they did it while aquiring a player loved by Lebron and sticking it to a division rival. In Napier, the Heat get perhaps the best, ready now, point guard in the draft.

Pat Riley is not to be trifled with. He gets an A+.

The good news is that's half the drafting teams covered. The bad news is you'll have to wait till part 2 for the rest.