(Editor Arturo's note: I screwed the data for two players. Kyle Anderson from UCLA and Spencer Dinwiddie from Colorado. I have fixed this as of 2AM EST on 6/26/14)

C-3PO: Sir, the possibility of successfully navigating an asteroid field is approximately three thousand, seven hundred twenty to one.
Han Solo: Never tell me the odds!

— Star Wars Episode V: The Empire Strikes Back
The draft in the end comes down to understanding and managing the odds.
In the first two (and a half) parts (here, here and here), I built and shared with you the tools I would build to analyze and understand the odds and the value of each and every player. You want to know about NCAA players?

You need to see the international and the Dleague players as well?

With these tools in hand I can see and compare every prospect (with one notable exception) for the 2014 draft and I can make the most informed analysis possible.

Thing is analysis of the odds is not enough. There is a point when you have to make a decision. To paraphrase Mark Twain, 99 percent of success is built on failure. You have to take chances to succeed. The draft is a key illustration of this. You're queasy about taking the potential franchise altering center because of his injury history? The tall point guard intrigues you but you have zero meaningful data on him? The killer Euro prospect is enticing but euro data is somewhat murky? Tough, you need to make a choice and take a risk.
The trick is to manage that risk appropriately. Never put all the eggs in one basket. The wrong approach is to bet everything on one pick. The right approach is to diversify and increase the amount of plays that you make. Look at what the Sixers, Celtics and Suns are doing. The Sixers in particular are super interesting. They won last year's draft handily and there is a real chance they're about to repeat. I could totally see them winding up with the three best players in the last two drafts by the end of the night.
We will be here to talk you thru it.
Let's get to the final draft rankings shall we? We will be using two flavors to rank the prospects this year depending on the professional league they play in. For all those plying their craft under the yoke of the NCAA, I'm using my updated version of the two models to predict the future performance of NBA draft picks (go here for the model build parts 1 & part 2  and here for the detail on the update). In very general terms, the models use the available data to predict future performance for each player coming into the draft from the NCAA. Based on that prediction, a ranking is done and a draft recommendation is generated.

It has performed at a very high level. For the full history you can go to:

A neat little summary of how the model does is this:

As promised in a previous post, I will be updating this to include the 2010 class and doing a review on the 2013 class over the summer as it really deserves its own post.

European and DLeague prospects will be rated based on their actual professional competition numbers as projected to the NBA as shown in part two of the analysis. I will be doing this for all ranked prospects in the Draft Express database as well as any seniors that the draft model recommends be drafted. I did model every possible player but 1000+ prospects do not show well on a table. Feel free to request any player that you might like to see in the comments and I'll share their numbers.

There are four notable exceptions. Dante Exum (#5 in Draft Express), Artem Klimenko (#38), Cristiano Felicio (#78) and Maximilian Kleber (#85), where the data is either non-existent (Exum and Artem) or from a less than great league (Cristiano and Maximilian). For the last two it's not a real problem, as if you're interested, you can probably just invite them to summer league and your Dleague squad. Artem you can have for a second rounder but there are safer options that will be available. Exum is the big question mark. I'm going to link to the excellent piece Ryan Russillo did on Grantland. Here's the critical exchange for me:

Scout 3: I have no comparisons for him. None.

Unless you are some super-scout that saw him on some JV vocational team in Australia, you have only seen him live twice in like 14 months. The workouts give you nothing; we already know he’s big and an athlete. It’s a risk, but last time we saw him at the under-19 he dominated.

It’s all upside, but he’s never played against men. He has all the physical skills, great feel for the game, so that is where you start when you think about position in the NBA. We project PG will be his primary position.

To think he’s the third pick in the draft, and hasn’t played in 12 months … man, that is impressive.

Russillo: I swear we should just replace the word “upside” with the phrase “we don’t know how bad he could be.” Like everyone else, I’m not sure. He is a product of human nature; we don’t know enough about him, so we assume he is going to be good.

Caveat emptor. I wouldn't touch this kid with a ten foot pole. Way too much risk for the money, guards are a dime a dozen in the NBA,there are better and safer options in Europe.

If I'm going to risk it all on the mystery box, I'd prefer it to contain a freakishly athletic big man.

Let's get to the numbers. We start with all the NCAA ranked prospects and seniors rated as picks by our model. You'll note that unranked Seniors will show up highlighted in black. I've also put in the net player rating for the 2013-14 NCAA season as per part 1, this is to give you an idea of how productive the players actually were in college.

We have 18 two star prospects (i.e selected by the two models) and 10 one star prospect (selected by only one) amongst the NCAA players. Of these, 10 and 4 are likely to see the court in an NBA game. How does this compare historically? 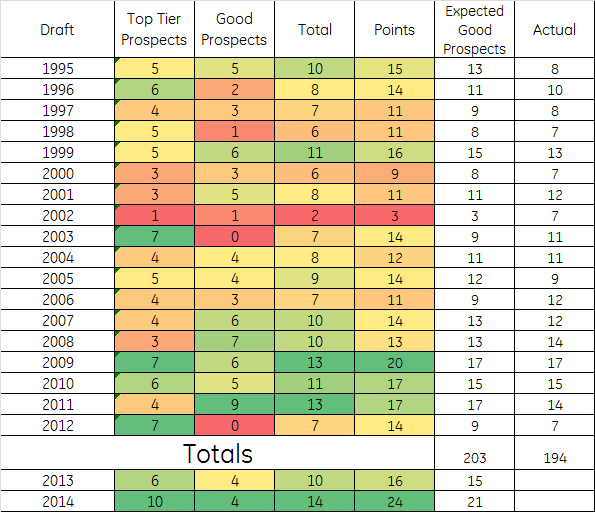 That would prospectively make this the best draft in our numbers. It gets even more fun when we add in all the international prospects.

A nice graphical way to view this follows. 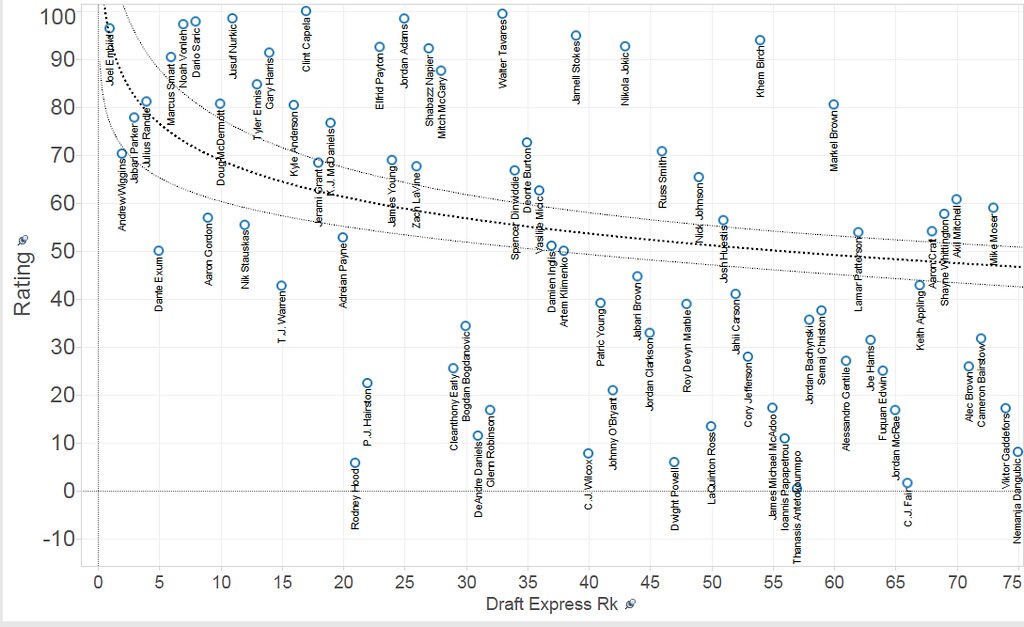 Let's break it down by position so I can then give my two cents. We start, as you always should in the draft, with the bigs. 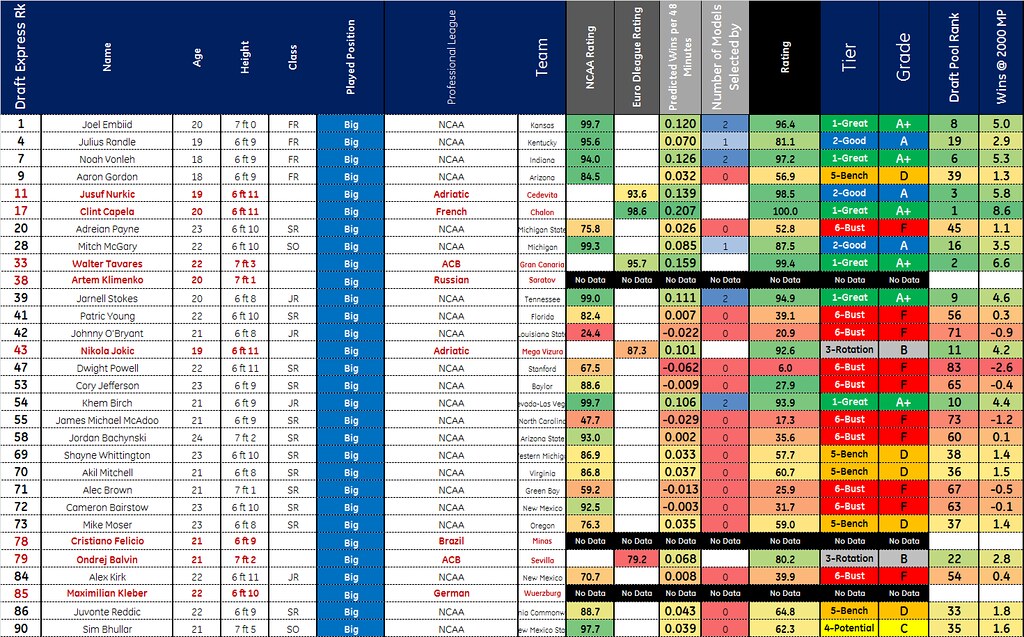 Let's do the wings next: 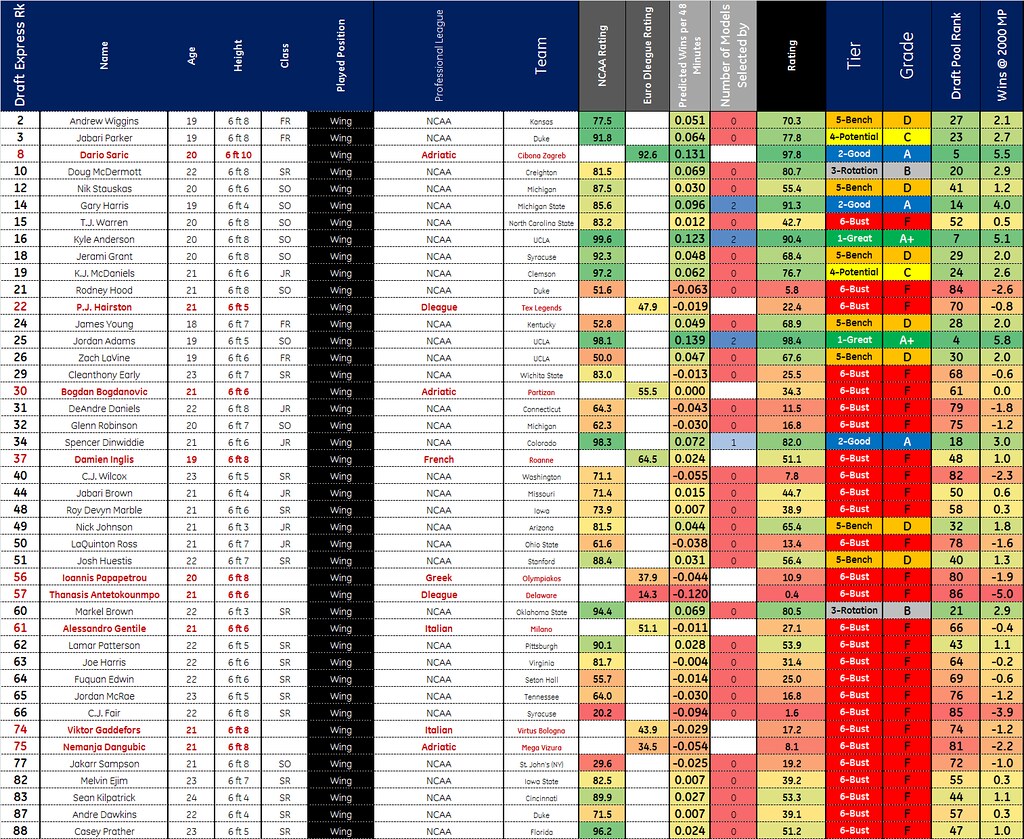 Let's end with the smalls:

With that we come to a close. I swear I've put a month's worth of work into this post.

Oh, there is one more thing. Here is everything in a worksheet so you can play with it and follow along during the draft.

Cleveland you are officially on the clock now.