First, a reminder, if you want a chance to fight cancer, win an awesome shirt, and prove your prediction abilities, head over to the Yeh Points Challenge. Do you think you can guess which player will score the most points before the All-Star break? If so, put your money where your mouth is! And in a related note, we have a post inspired by Chris Yeh's love of the Los Angeles Lakers. 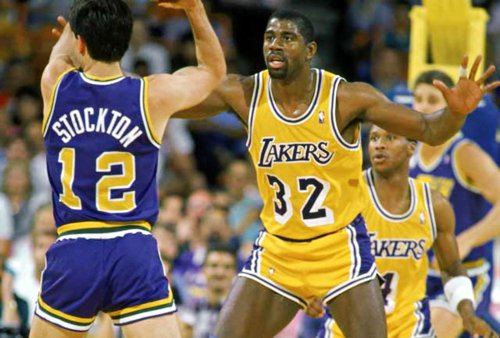 Chris Yeh, the ultimate Lakers fan was reminded of better times in Los Angeles history with Magic Johnson agreeing to return to the Lakers in an advisory role. Magic, in his prime, did indeed bring many wins to the Lakers franchise. In fact, breaking down just how many great seasons Magic had is downright astounding.

Let's start with a stat Chris noted to me. Magic Johnson has the record for seasons where he produced over 20 wins. In fact, it's a good bet this record will stand for a long time. Below is a chart of all players that have produced at least one twenty win season. 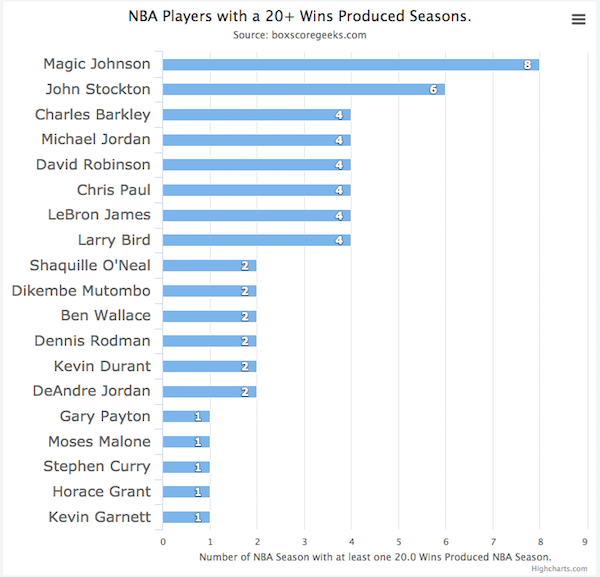 While Chris Paul and LeBron James are still active and within striking distance, both players are now in their thirties. Magic Johnson hit this mark eight times! Eight times! And, he did so by the time he was thirty-one years old. Magic Johnson was truly remarkable. Let's do one more chart (which LeBron James may eventually be able to lead) 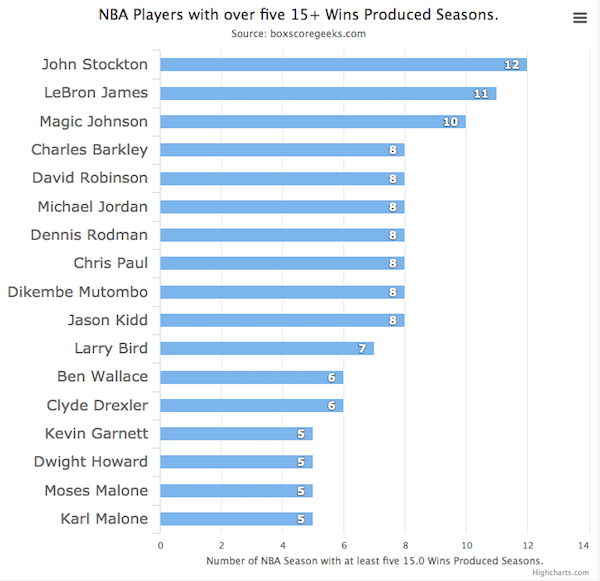 If we lower the threshold to fifteen Wins Produced, Magic Johnson drops to third on the list. Of course, John Stockton had six more seasons than Magic to cross the mark. LeBron James stands a very real shot of tying Stockton this season and maybe even standing alone eventually. To put Magic in perspective, he only played thirteen NBA seasons. In over half of them, he put up a twenty win season. In over two-thirds of them, he put up over fifteen wins. As Chris is fond of saying - "Magic Johnson is indeed the Greek god of Wins Produced."

Here's hoping Magic as an advisor can help the Lakers get some more wins. It would certainly help get some faith back from Lakers fans. As a note, Chris Yeh picked a Celtic as his pick in the Yeh Points Challenge! Here's hoping that won't be the case in future seasons.