Two Lessons on the Draft from Boston's Past

Two Lessons on the Draft from Boston's Past

I want to talk about Boston and the draft. And I want to remind you of the spot Boston was in in two various times in the past. 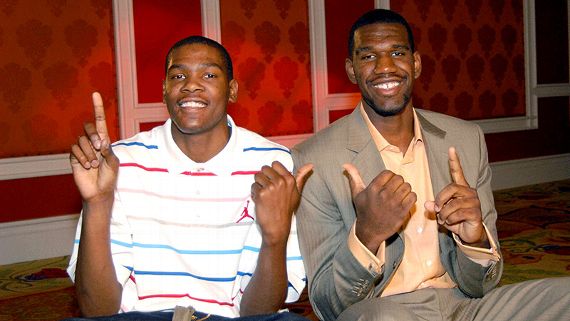 In 2007 Boston was in a weird place. They won 24 games and had an injured star (Paul Pierce). But the good news was they were entering a top heavy draft with Greg Oden and Kevin Durant. Except, despite good odds to get a top two pick, Boston missed. And here's where it gets interesting. Another team was in a very similar position. The Seattle Supersonics also had an injured star (Ray Allen), had only won 31 games, and were entering a top heavy draft. Except, unlike Boston, Seattle got "lucky" and earned the number two pick. But I'm curious if Seattle was really the winner here.

In basketball, a popular myth is if your team is bad that you need to "blow it up" and rebuild through the draft. And in terms of these two teams, Seattle was in the best spot to do so. They drafted Kevin Durant (who turned into Kevin Durant), and traded away Ray Allen, and got more draft picks and got a solid young core and eventually made it to the NBA Finals! By the classic mythology, Seattle was in a better spot, followed the plan perfectly and won, right? Of course not! Boston didn't end up blowing anything up. They did the opposite. They kept their injured star, instead of drafting a hot prospect, they traded all their unproven young pieces for Kevin Garnett and Ray Allen. Thanks to an underrated Rajon Rondo and James Posey, they turned into a great team that made it to two NBA Finals, and won one. And they did this all before Seattle reached the Finals. Now, it's important to note that both Seattle and Boston had luck. Seattle lucked into a top draft pick turning into a star, something that happens much less often than people realize. Boston lucked into a marquee name being available, which oddly happens more often than people realize. But between the models - blow it up, rebuild through the draft (and get lucky) vs. keep your good contracts, trade prospects for good veterans (and get lucky), the second model not only beat the first, it lapped it! 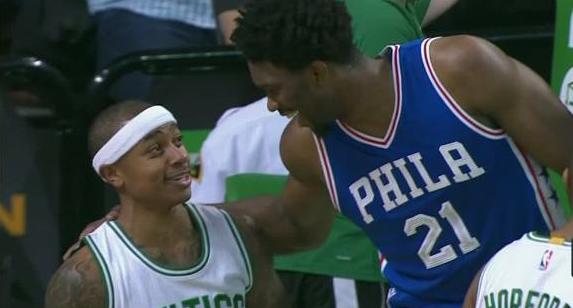 Story number two! In 2013 the Celtics has reached the end of the line with the stellar core from above. And indeed, it was time to move on. In 2012, the Philadelphia 76ers made a similar decision. In 2012 the 76ers jettisoned their best player in Andre Iguodala in a failed trade for Andrew Bynum. And shortly after they hired Sam Hinkie as General Manager. Sam Hinkie systematically removed the 76ers bad veteran contracts while acquiring tons of draft picks. The Celtics did a similar strategy. After Ray Allen left in free agency, the Celtics traded Kevin Garnett and Paul Pierce for future draft picks from the Brooklyn Nets (this may come up soon ...) they traded Rajon Rondo for Jae Crowder. And they also acquired draft picks. That said, they did something else too. The Celtics traded the Sacramento Kings for Isaiah Thomas. They also signed Amir Johnson and Al Horford. And these four players actually helped the Celtics win the Eastern Conference and make it to the Eastern Conference Finals this season. Now, the difference between Philadelphia and Boston is that Philadelphia continually tanked and attempted to "win" the NBA draft. Boston, however, kept acquiring good veterans, and as such is now a 50 win team that was a few wins from another NBA Finals. Philadelphia? Well despite the amazing enthusiasm I'm seeing about a core of Embiid (who has played 31 NBA games, and has never cracked 30 minutes in a game), Ben Simmons (never played an NBA game), and Fultz (more on that in a second, and again never played an NBA game), it's ludicrous to think they'll be sniffing an NBA Finals sooner than the Celtics will.

The moral? The tanking is the path to an NBA title is one of my most hated myths in NBA lore. And where it gets weird is we can use the Celtics as a pace car for it, multiple times now! As I've said, I think the work Hinkie did with draft picks in the NBA was genius. I love getting rid of bad contracts too. But the path to winning in the NBA has always involved signing productive veterans. And the Celtics have twice now shown how much quicker you can retool by doing this. When you're lucky and the stars align, you can get a championship squad. Even, with so-so "stars", you can still be a top seed. And there will always be teams getting rid of veterans in a rush to rebuild. The Celtics currently have the number one pick in the NBA draft. However, it looks like they are trading it to Philadelphia in exchange for the third pick in the draft, and a future first round pick (either the Lakers pick next year, or the Kings pick in 2019). And some are speculating this means their end goal is to trade assets for Jimmy Butler and/or Gordon Hayward. And if that's the case? I'm all for it! The Celtics have twice now easily "won the race" with teams that tried to rebuild through the draft. I'm not worried about the Celtics waiting for a top prospect to pan out. The Celtics were a good team last year, and with a few upgrades could be a great team. Hopefully they remember their own recent history.