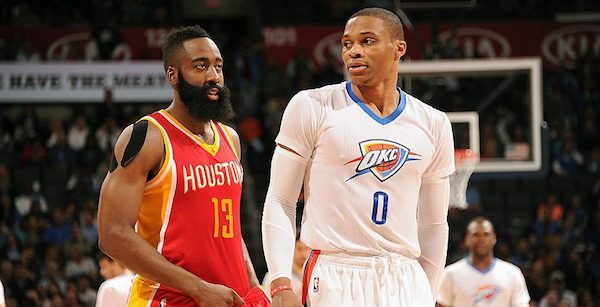 Over half of the triple-doubles in the NBA in one image.

Today's topic is triple-doubles. I break down five thoughts I have on the subject of triple-doubles. Unsurprisingly, Russell Westbrook will dominate much of the discussion!

1. The Record is likely Westbrook’s!

Westbrook now has forty triple doubles and the Thunder have five games to play. Westbrook only needs two more triple-doubles to pass Oscar Robertson’s record of forty-one triple-doubles in a season. That’s as good as done!

I’m fine to be proven wrong here. That said, I feel winning is still too tied to the MVP award. Michael Jordan is that last player to win the MVP with “only” fifty wins for his team. At best Westbrook’s Thunder will finish with 49 wins and will place in the bottom half of the playoff seeds out west. Additionally, unlike MJ, there’s enough solid competition to keep him from the award. (Harden, for instance, has twenty triple-doubles)

3. The Pareto Principle of Triple-Doubles

4. Triple-Doubles aren’t for everyone

It turns out only more than half of NBA teams have a player that have recorded a triple-double. Atlanta, Boston, Brooklyn, Dallas, Detroit, Indiana, Miami, New York, Philadelphia, Portland, San Antonio, Utah, and Washington only have a few games to get a triple-double!

5. Westbrook is selfish with Triple-Doubles

As DG22 has noted in the comments, my "regular" column going over the top ten boxscores of the week has been noticeably less frequent, seemingly since Westbrook has been dominating the triple-double scene. Admittedly, as I get busier, I'll get behind on these, so it likely won't be a regular piece anymore. That said, I do love list form articles. So my goal will be to make these a more regular thing. I hope giving Westbrook this much space on the first one makes up for the lack of top ten boxscore lists that he would no doubt have dominated!