It was an interesting fourth of July weekend for the NBA's version of the hot stove league. It all kicked off with this:

Melo to Houston. Bron to Cleveland.

Wish I was back home I'd drive up to Cleveland tonight and go celebrate wit the homie @DaRealShow for his b-day! #LiveItUpToTheFullest

That got real very fast. Apparently, Lebron's family and inner circle (let's call them #LaFamilia) all want him back in Cleveland next year. Speaking of #LaFamilia:

Seems like a tremendous amount of smoke if there is no fire there. I personally think the reports are correct. Lebron's family want him back in Ohio. I've gone from thinking Lebron wouldn't leave to making the Cavs 70% favorites. Must be the wind.

Cleveland has replaced Miami as my frontrunner to land LeBron James...

These convos aren't sourced enough 4 me to report as fact. But I've heard enough to believe "the wind is blowing" LJ back home. We'll see...

We've got BigZ on a plane!

Now Lebron might be on the move and so might Bosh. Melo seems intrigued by the Lakers (which just cause me to have a schadenfreude induced orgasm). Crazy rumors about Kevin Love are floating in the ether and Lance Stephenson still lurks.

I'm personally rooting for Lebron to the Cavs and a reloaded Heat as our season opener in cleveland. While this is playing.

I get chills just imagining it.

All that free agency talk had a secondary effect. It got me off my tail this weekend to make a guide for all the prospective (or already signed) free agents that shows what each player is and projects their fair contract value for the next five years. Particularly, because I'm too lazy to look up all the data by hand after every single signing or rumor breaks.There are also some complicating factors at play (which I will explain shortly)

There are some great tools online that I used to pull this together. The NBA has a nice an simple tracker that is fairly complete if a bit behind on the news cycle. We have our player production metrics right here at boxscore geeks which I cmbined with the age model I came up with and have explained previously. With that, I can make a list of all the prospective free agents and do a projection on their win total per year over the next five seasons. Where it gets complicated is that we are not quite sure what the value of those wins is going to be. You see, the NBA is about to see it's national tv contract grow exponentially.

The effect this new telivision deal will have on player contracts is somewhat complicated. If you feel like wasting and afternoon, spend some time combing thru Larry Coon's salary cap FAQ so you can hazard your own guess as to the effect. Or you can simply trust my approximation. 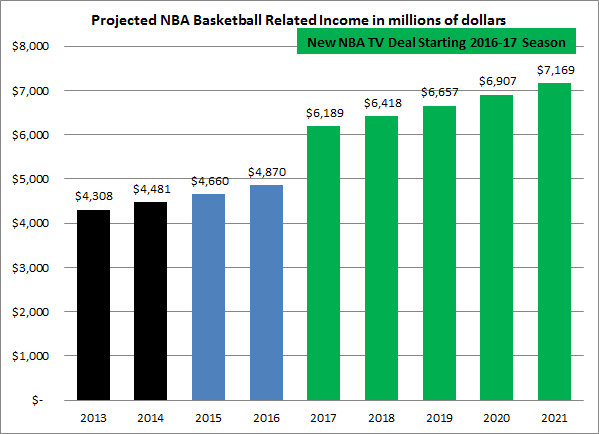 That is my approximation for the growth in Basketball Related Income after the next national TV deal. It assumes an annual increase of $1.1 Billion dollars in revenue for the NBA per season. If we also assume that the players remain at the current 50% share of income currently defined in the CBA (a rather larger assumption as there is every indication the players want more and are going to possibly strike for it) we get:

That table shows all 156 free agents, their numbers for the last three years, and their value projection at their current minutes and at 2000 minutes per season. Now, I get that may be a little small. Feel free to click on it to get it at full size and/or go here to download it.

Let's use it to go thru some of the signings.

#1 Avery Bradley signs with Boston for 4 years 32 million. At 4 years the recommended contract was $24.2 million at the current minutes and $26.1 million at 2000 minutes per season. Not as bad of an overpay as I initially thought but still way over what he probably gets on the open market. Bad contract.

#2 Kyle Lowry signs with Toronto for 4 years and 48 million. Huge win for Toronto. The recommended contract for Lowry was $90 million at 4 years and the current minutes and it was $62.7 million at 2000 MP. Masai and the Raptors get a huge bargain for the future.

#3 Darren Collison signs with Sacramento for 3 years and 16 million. Good deal for the Kings. The recommended deal was 3/35.

#4 Shaun Livingston signs with Golden State for 3 years and 16 million. 3/30 was a fair number for Shaun. The key with him is if he stays healthy.

Now you know how to play. We will continue to update the list and go thru all the signings as they happen.