The "Easiest" Way to Win a Title

Correction to earlier post. I mistakenly put Tim Duncan as the Spurs top player in 1999 and 2003. In fact, these years were held by David Robinson and Manu Ginobili. The chart and table have been updated to reflect this.

A common meme among the sports sphere is that you need an elite player to win a title in the NBA. This is where conventional wisdom matches the stats quite well. Historically, a team without a top talent has little to no shot at a title. A related meme is that the best way to acquire such a player is through the draft. This is why teams tank, and why non-protected high draft picks are so coveted. This is where reality and conventional wisdom diverge.

Here's a breakdown of every NBA title team since the modern day draft lottery has been in place (1990-1991 season). I've listed the top player on each team to win the title (I'm using regular season totals) as well as how they were acquired. 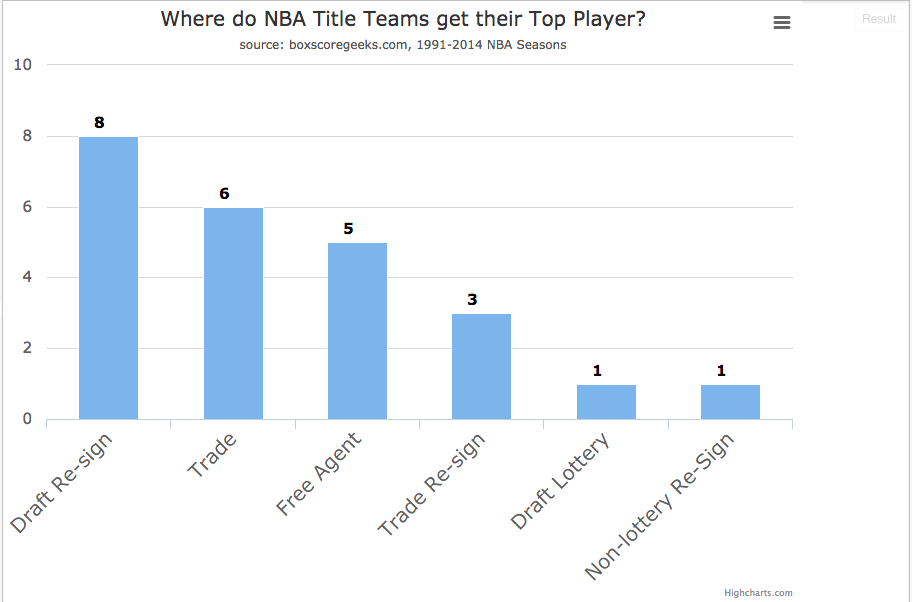 We start with a "Myth Busted" here. In the last 24 titles, the best player on the team that won it all was not drafted by that team (we exclude Jason Kidd because he was traded and then came back). Fourteen of the last titles had the "star" player come from a trade or free agency. And on that note....

Let's talk categories a bit. The one major label I've added is the term "Re-sign." Sure a team may acquire a player by the draft or trade, but when their contract is up, the player is free to look elsewhere. Now, it's true with Bird Rights; teams have an edge in negotiation. Namely, they are allowed to go over the cap to keep a star player. This only makes sense though if the team the player is coming back to is good. It's why Michael Jordan would return to the Bulls with Pippen, but LeBron told Cleveland to shove off. Yes, ten of last title squads drafted their star. But a full eight of them had to re-sign that star. And, this list is pretty much Michael Jordan (we're being generous with him coming back from retirement counting as a "draft pick"), Tim Duncan, Hakeem Olajuwon, and Horace Grant. Despite changes to the CBAs making it harder for draftees to leave their teams, the title teams that did it with a top draft pick coming back were all in the eras before these rules. Indeed, both Michael Jordan and Tim Duncan almost left their respective teams ala Shaq.

I've got a bit more to say, but let's take a brief break, I'll let you scan the full list of players. Also, feel free to flip out at Horace Grant and Dennis Rodman over Michael Jordan some years.

Winning a title is contingent on getting a star. While drafting such a player is a way to do this, it is not the only way, and certainly not the easiest way. Even for teams that do luck into drafting such stars, they're usually years away from being in a spot to compete. If they don't have a team built for their star by the time their rookie deal and restricted free agency runs out, they'll lose them.

We are certainly not suggesting it's impossible to find a star in the draft. We're also not suggesting a team like the 76ers, who is stockpiling draft picks will be able to compete. All we are saying is since the Draft Lottery has been in effect, the notion that a title team needs to win their star in the draft has not been true. Lucking into a lopsided trade or having cap, and an appealing team in the right free agency has been the clear victor so far. I don't suspect we'll stop fans and teams from hoping that the draft will answer their prayers. That said, for teams that try and learn from history, it might be worth looking into.

Thanks to David Berri, Arturo Galletti, Shawn Furyan, Ari Caroline, and Ben Gulker for their help on this piece.