The "Easiest Way" to get a Big Three

We've discussed the methods title teams use to get their top player. It turns out the "they find them in the draft" myth was found wanting. As some astute readers pointed out, title teams often need multiple good players. So we expanded our net and looked at how teams acquired their core three players. And again, we find that the draft may not be the only place to look.

Check out yesterday's piece on how team's acquire their top player here.

Here's a granular breakdown of how title teams acquired the top three players on their squads. The full table is pretty large, but I'll put it at the end of the post. 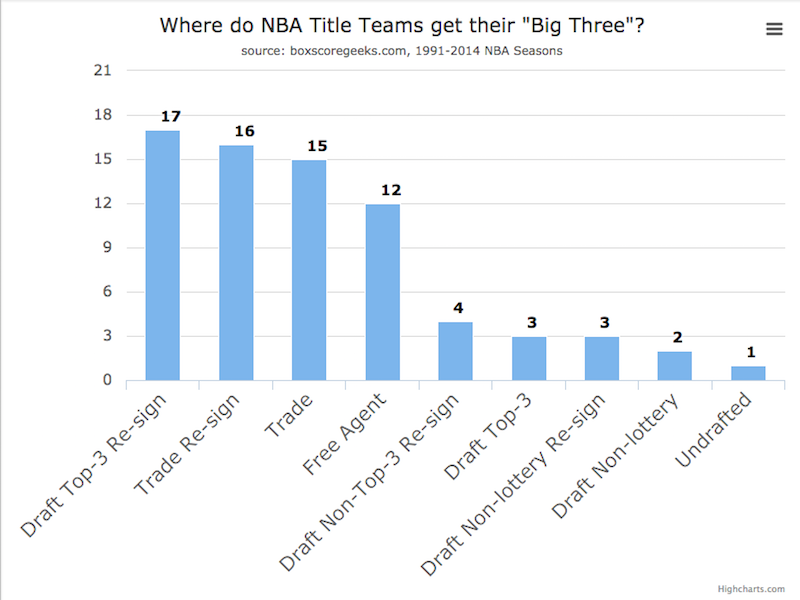 I selected players based on their Wins Produced for the season according to the numbers at boxscoregeeks.com (this very site!). You can view them yourself if you'd like (e.g. here are the 1990-1991 Bulls - http://www.boxscoregeeks.com/teams/chi?season=1990). I used realgm.com's transaction history to verify how players were signed. Finally, not all big threes are created equal. The Jordan, Pippen, and Grant/Rodman cores were top heavy cores of stars. Some squads, like the early 2000s Lakers, were a tad less balanced. With that in mind, enjoy the analysis!

Who needs the draft?

Yes, the biggest group on the list is a top three draft pick that re-signed. But compared to the combined total of the next three groups: Trade Re-Sign, Trade, and Free Agent, it's dwarfed. It's also worth noting that a draft pick outside of the top three was in 10 squads, compared to 20 squads with a top three. I want to stress, we are not saying that you can't build a team through the draft. We are not saying that teams can't find a star player by acquiring lots of picks. We are saying that the conventional wisdom – "the best way to get a star and win a title is with a top draft pick" – is not true, and that the history of the draft lottery demonstrates that.

But, you at least need *one* top draft pick, right?

This idea got bounced around too. After all, sure you can coax Shaq to come over to your team and contend for a title, but you'll probably need to get at least one of your stars in the draft, right? Well, not really. The following teams had their top three players without the aid of a lottery pick:

Basically, almost half of the teams from 2000 on have required even a lottery pick the team acquired themselves. And only the Spurs and Heat have been lead by a player they themselves drafted in the lottery. The Lakers have shown it's entirely possible to "buy" a team to win. Even the Celtics, who had Paul Pierce, got most of their production from outside sources.

Let's talk Kobe Bryant and Kawhi Leonard for a second though. You'll notice they're counted as trades. This is because they were! On draft day the Hornets and Pacers held their rights respectively. Both of these teams decided to give up these rights for other players. There is no way to act as if the Lakers or Spurs drafted these players, because they didn't! Dirk Nowitzki is a different case, Ty Willinghanz has a good write up on that. I should also stress the importance of Kobe and Kawhi. The Lakers and Spurs waited until the last possible moment to cash in on a player. They didn't attempt to trade Vlade Divac or George Hill away for future assets. They played them until the season finished and were still able to convert them into rookie players. You can't use the logic: "You need draft picks!" when some of the most successful teams have shown, you can wait until drafting is done to grab the player!

But, you at least need assets, right?

Ok, so you don't strictly need a player you drafted. You don't even need to draft the player. Another argument I'll see is that in order to trade for players you need assets, namely draft picks. This logic is also flawed. Let's break it down with some questions:

Do you have a good team? Yes? Then you have good players, who are assets you can trade. See the Spurs with George Hill.

Wait, you have a bad team? Well, congrats, the NBA is going to give you a draft lottery pick (or more, if you keep sucking) and those are assets!

Wait, you have a bad team but you traded away your picks? Well, lucky you, you likely have some cap space, which is an asset you can use in trades to get better players!

Wait, you have a bad team, no picks, and no cap space? Well, you're the Knicks. You suck. What else is new?

A final kinda weird aspect I note here is people explaining "Well of course teams need the draft, because they have no hope of acquiring a star otherwise. Small market teams can't hope to attract a star, or certain markets aren't appealing." The issue here is that at any given point, there are only about ten to twenty elite players in the NBA. Trying to guess their behavior is a fool's errand. First, the situation of the NBA has to be just right. Their contract has to be up and a team has to have cap. Or there has to be a team with the right cap situation to trade with them. Even then, their own quirks come into the mix. Take Shaq for instance. He actually left a 60 win team, that still finished with 45 wins without him. He was pretty much offered the same amount of money. He wanted to play in Los Angeles, and was willing to wait to win more. Tim Duncan has repeatedly left money on the table to stay in San Antonio on a winning squad. Stars are people. And people have all sorts of different criteria they use in deciding where they'd like to play. I see people chase down rabbit holes defending the draft because "No star would ever want to stay in...." until they do, of course!

I'm not saying bigger markets and winning teams don't have an edge in attracting stars. Of course they do. But let's not act like the draft lottery even comes close to combatting that.

In Conclusion, it's all MJ's Fault

Ok, not really, but hear me out. In the 90s Michael Jordan became the face of the NBA. He was a guard that could score at will. The idea that you needed a scoring guard to dominate permeated quickly. I think it's why fans were so quick to deem Allen Iverson and Kobe Bryant more important than they were. Also, He was a top three pick on a team that "grew its own talent" (ignore that Pippen was a trade and that Horace Grant's number isn't retired). This narrative has stuck with the NBA. The idea of an NBA team getting a top three talent and building around that seems so logical. And yet, after Jordan left, this just wasn't the way NBA teams built title squads. Even the Thunder, who looked close, fell apart when it turned out Presti and Brooks were no Krauss and Jackson. Anyway, long story short, the short history of the draft lottery suggests it isn't the key to a title team. I don't suspect people will stop hoping though.

Thanks to Devin Dignam, David Berri, Arturo Galletti, Shawn Furyan, Ari Caroline, and Ben Gulker for their help on this piece.

Appendix - All The Stars

As promised, here's the huge table of the team's big threes and where they came from. Please let me know if I have any errors!