The Boxscore Geeks Show: The Mighty Ducks with special guests "That Thing you Like"

The amazing podcast: "That Thing you Like" stops by to discuss one of the greatest movies in cinema history: "The Mighty Ducks." We talk about how good it is, all the "wtf?" moments in it, and draft ideal Ducks fantasy squads.

You can watch us live at twitch.tv/nerdnumbers almost every Monday at 9:30 pm EST.

We're thrilled to have That Thing You Like as our guests. Check out their podcast over at thathingyoulike.com, where they have a weekly podcast on pop culture and things you like.

And if you're still not entertained, Chris and Brian do a fantastic web comic: "Friend Zone", which updates twice a week, which you should also check out.

Good plus to Shit minus Rating

The That Thing You Like podcast has a patented rating scale. We apply it to the Mighty Ducks. I won't spoil our ratings for you. Tune in!

As a side note, the 15% rating from critics on Rotten Tomatoes is criminally low.

Unless you count Pixar's "Inside Out", Mighty Ducks holds the distinction of being the highest grossing (adjusted for inflation) movie about Hockey.

How good is the hockey in the movie? 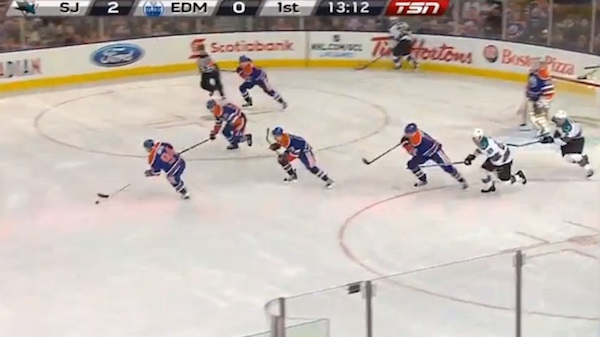 We discuss several of the key strategies and coaching techniques in the Mighty Ducks including:

The Mighty Ducks had many many things that just made us go "WTF?" and we discuss as many of them as possible.

The movie takes place in Minnesota during winter. Yet the kids rollerblade everywhere and snow is sparse.

The movie takes place in Minnesota, yet no one speaks with a midwest accent.

Tangent, there are ten Canadian provinces, not five. I may get this wrong in the show.

What's the deal with the prank scene early in the movie with odd sound effects and the superfast frame rate?

A hockey line with two black kids and a white kid is called: "The Oreo Line", first as an insult by the villains. Then affectionately by the coach Bombay. Seriously movie, WTF? Brian Foster did some research and this slur had been around since the 60s, so no excuses writers. 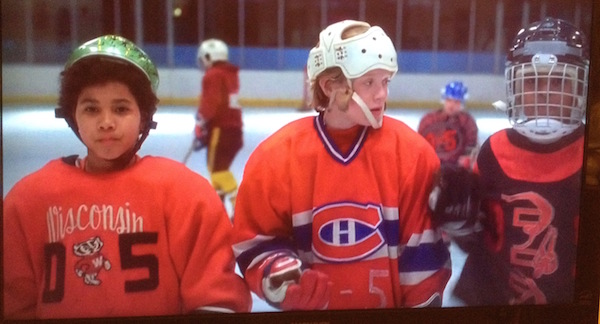 A lot of the representation/racism moments in Mighty Ducks remind me of a great comic by Chris about "The Unbreakable Kimmy Schmidt."

We see Gordon Bombay drinking and driving in this movie. Will we ever see a protagonist in a kids movie do this again?

Great parody ad of NHL "history will be made" using Mighty Ducks and Gordon Bombay's DUI.

We're told Fulton Reed's slap shot "only" connects one in five times. Ray Bourque was one of the most accurate slap shooters in NHL history and his prime time shot % was 6-10%. So Why the heck don't the Ducks just have Fulton shoot 20 times a game?

Chris points out how into this Pee Wee hockey team Minnesota is. It's a bit odd in a major city is so into a fourteen team league. 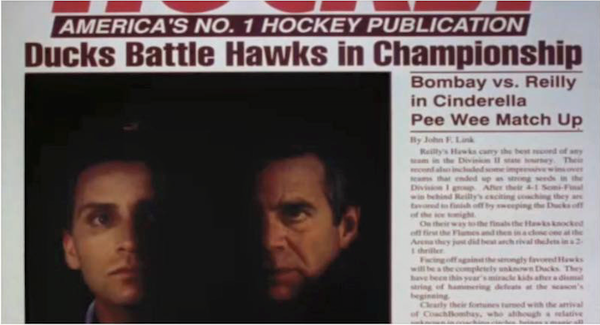 I don't think Gordon Bombay learns his lesson this movie. To clarify, he's supposed to learn it's not all about winning. Yet, he pulls Adam Banks off a team with his friends to help the Ducks win. In short, Gordon is willing to win at all costs.

Of course, Gordon getting his law firm to invest in the community probably offsets that, so your mileage may vary.

Gordon and Hans seem to have a friend with a custom print shop and they seem to enjoy making custom jerseys/shirts/etc.

What is up with how hard Charlie is trying to get Gordon and his mother together? We use slightly more colorful language in the show.

Listen to the That Thing You Like podcast on "They Came Together." which talks about the popular "new dad" movie trope.

What is with Adam Banks' dad staying aligned with the Hawks in the championship game?

What is with the Hawks being willing to permanently injure Adam Banks?

Goldberg sucks. That is all.

We do a round by round power ranking where each of us picks a person in the movie to construct an ideal three person team. Tune in to hear it. Spoiler, I lose badly.