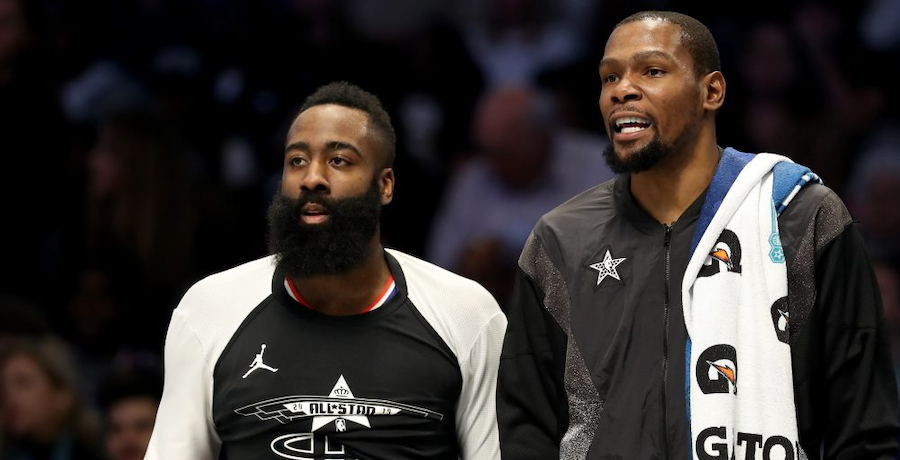 I was pretty busy this afternoon, and when I checked in on NBA Twitter, I saw "James Harden" traded. Before looking up the details, I kept seeing random tidbits - "Oladipo flipped," "Cleveland won!" (from Brian), etc. I was confused. With a little bit of time to crunch the numbers, I remain confused by the whole trade, but let's see if we can sift through the tea leaves.

Let's review. There's a whole lot of meh contracts in this deal. Houston did wind up with four first-round picks and four first-round swaps with Brooklyn. Those picks were the 2022 from Brooklyn and Milwaukee and the 2024 and 2026 pick from Brooklyn. Those 2022 are likely to be out of the lottery. The 2024 and 2026 picks may be decent if Brooklyn atrophies. However, the net result is these picks aren't likely to be future lottery picks that'll help Houston rebound from losing a star.

There are only two contracts that matter. James Harden three-year veteran deal and Jarrett Allen's last year of his rookie contract. Both of these are easily worth the money, but that's actually what confuses us. Jarrett Allen has been near the top of the Wins Produced leader board this entire season and had a fantastic season last year. He's a big reason Brooklyn could make the playoffs without Durant. Even with the raise he'll undoubtedly get next season, he's the prize of this trade. Let's do a team by team take.

If only Allen had walked out the door for Harden, I would have considered this a loss for Brooklyn. As-is, I consider it a subpar gamble, but not a horrible deal. Honestly, I prefer Harden on a contender in a large market to the current Rockets. Hopefully, Fertitta is too stingy to pay Allen, and he winds up on a more deserving team.

Cleveland got the best contract in the trade. It's a bit confusing with Kevin Love, Andre Drummond, and Larry Nance already on the squad. However, Andre Drummond's on an expiring deal, and his production may be slipping with age. Kevin Love has been banged up. Larry Nance is on a great contract for three seasons. If the Cavs sign Allen, keep Nance; they'll be in good shape if they make solid moves. Fingers crossed.

Indiana has been looking strong, thanks to Malcolm Brogdon. Oladipo was a promising young player that had a high ceiling. He hasn't been healthy or productive in years, so I could see the Pacers wanting to cut ties. However, he's on an expiring deal! Caris LeVert has never been a good player but is on a longer contract. So the Pacers took a mediocre player that's shown flashes of greatness when healthy and turned him into a bad player on a bad deal? I don't get it. The Pacers should have just seen if Oladipo could return to form and, if not, trade him at the deadline to a selling team looking for cap relief. As is, they just made a bad move instead.

Houston ... Wow ...
Early on in the Boxscore Geeks days, we championed James Harden and what a steal it was for Houston. Somehow the Rockets didn't learn from that, as they basically traded Harden out on a similar and impressively bad deal. As noted, none of the picks are that fantastic. In fact, all of them are in the range a standard team could trade or buy them. None of the players the Rockets got back are currently productive. The best they can say is two of them are on the last deal of their contract. I get Harden wanted out. I get things looked bad. But this trade alone shows how badly the Rockets messed up. Had they turned Harden into Jarrett Allen and expiring deals, I'd have applauded them. Instead, they let Cleveland get Allen and got a bunch of nothing. The Rockets were one game from the NBA Finals and likely a title two seasons ago. A lot can change, huh?

We'll definitely talk this more the next time all of us are in front of a microphone. There are more questions, such as how James Harden will fit next to Durant and Irving, or if Irving is coming back. Regardless, it's exciting to have a fun trade early in this NBA season. What do you think?