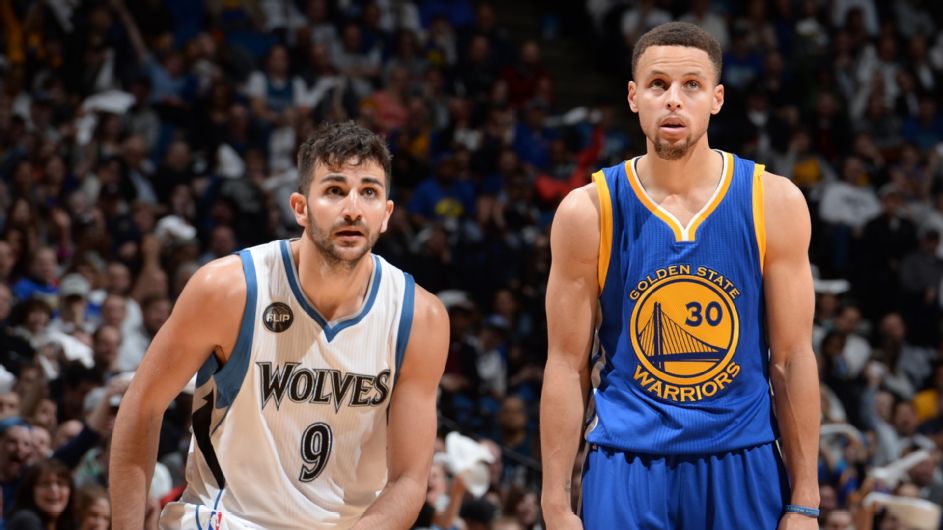 Who do you think Patrick's betting on?

After a year hiatus, the Boxscore Geeks portfolio returns. If you are new around here, this means that Patrick went to Vegas and pulled out his wallet to bet on the NBA season (this year, it's $4000, in previous years, it was a little more). The portfolio follows some simple rules:

OK. First, let's take a look at all the bets, then I'll break it down with my thoughts.

* indicates that the bet could push.

Golden State Warriors OVER 66.5 Games
GSW NOT to win the 2016-17 NBA Championship

This one is complicated. I think the right over/under for the Warriors is probably about 71, and that's because I am pretty sure the coaching staff is going to consider winning 73 or more as a jinx after what happened last year. There are going to be nights where this team makes 55-win teams look like Division II college squads. Of course, there's the injury risk, but this is true for any over bet, and having two MVP caliber players instead of one mitigates some of that.

Having said that, I think in any given preseason, taking the field vs. any team is a no-brainer if you are given better than even odds. They may be the best team in the NBA, but they have to survive injuries and win four series. And, well, sometimes underdogs win playoff series. Hell, sometimes underdogs even come back from a 3-1 deficit to win series.

To put this in perspective, let's assume the Warriors make the playoffs and have win probabilities of 95% in round 1, 90% in round 2, 80% in round 3, and 70% in the finals. With those back-of-the-napkin numbers, the probability of the Warriors winning all four series is 47.8%. But since this bet assumes that the field is a 55:45 dog (rounding a bit), the Warriors must win 55% of the time (or more) for this to be a bad bet (it's 57ish% for the +130 bet). Again, this is if we ignore injuries or an improbable blockbuster trade that has some other team improving a lot, like if San Antonio traded Tony Parker and LeMarcus Aldridge for DeAndre Jordan and Chris Paul or if Cleveland traded Kevin Love for Hassan Whiteside (hey, I said "improbable").

"BUT WAIT!" you cry. "You just said no hedging, and you are betting both for and against the Warriors! That's cheating!"

Let me introduce you to a concept called middling. It usually applies to spreads, but I think the concept applies here as well.

The most famous example of middling in sports betting history is probably Superbowl XIII. The Steelers opened up as 3.5 points favorite, but later in the week, the line moved to -4.5. Some smart folks who already had huge amounts of money on the Steelers decided to also put massive amounts of money on the Cowboys. They now had both sides of the bet, so they had a very small downside (i.e. the rake). But they had a huge upside: if the Steelers won by exactly four points, both bets paid!

This is a long way of saying that:

There will be many more opportunities later down the road that are very similar to middling (for instance by betting on the Warriors to win each of their playoff series in the Western Conference).

I like the Celtics, and they are well coached, but I think Vegas is overestimating the impact of Al Horford just a little bit here. He's an upgrade, but not by huge amounts, considering that Sullinger was pretty decent last year. I think this one will be close and we'll sweat it all year, but I don't see age-related improvement + Al Horford adding up to a five game improvement from last year, especially with the improvements that their division rivals (and the East as a whole) have made.

I was hoping that the Noel injury would move this line down a bit more because I always liked this line even considering their terrible injury luck. To some extent, this is a bet on a couple of rookies that we've only seen briefly (Saric and Embiid) and their health, but it's also based on a couple of interesting factors. First, I think Brett Brown is a decent coach, and last year there were quite a few pretty close games where he suspiciously did not act like a very good coach in the final few minutes. I won't say "tanking", but I think he used a lot of those situations as teaching opportunities rather than doing everything possible to win. That isn't likely to happen this year. For better or worse, it's clear that management wants to flip the switch and try to win. Second, there are guys like Henderson, Bayless, and Rodriguez that are actual NBA players on this roster. It's no longer a collection of first-year guys trying out for the league. We're going to sweat it all year, but I think 28-30 is reasonable for this team, and there are even rumors that Simmons will return in January.

Houston Rockets OVER 44 and to Win the Southwest

The Rockets are an interesting scenario. Two years ago they won 56 games, and last year, with many of the same players, they missed the playoffs. Even though Dwight Howard is leaving, I think some regression to the mean is due. The question, I guess, is whether you think 2015 or 2016 was the outlier season. Vegas clearly disagrees with me.

There's also more to consider. First, I thought last year's squad was poorly coached (I'm referring to Bickerstaff, not McHale). Mike D'Antoni is clearly an upgrade, and some of the new personnel seem like great fits for the new coach's system (could this be a comeback year for Ryan Anderson?). Second, there's age-related improvement here that everyone is sleeping on. Keep your eyes on Clint Cappela, and I'm intrigued by Sam Dekker as well.

Side note: Vegas doesn't let you bet on MVPs because it's voted on, but if you have access to off-shore betting I like Harden as an MVP pick. Playing in D'Antoni's system, often as the primary ballhandler, he could lead the league in scoring, and if the Rockets win 50+, that's the kind of narrative that voters love, especially with Curry and Durant splitting votes.

Minnesota Timberwolves OVER 42.5 and to Win the Northwest

I have a long history of betting the over on Minnesota, and I'd like to think it isn't just homerism. The first time, I lost because of Knuckle Pushups, the year after that I missed by one game because of a Rubio injury. This team, perhaps more than any other, is very vulnerable to injury. Both Rubio and KAT need to stay healthy.

But...Karl Towns just looks too damn good to pass here (another great sleeper MVP bet, btw -- if he puts up monster numbers and the Wolves win 50 games, you can bet the media will be writing about him a lot). The thing about Minnesota is that it has multiple things going for it:

Last year the Pacers won 45. This line seems to indicate that Vegas thinks George Hill and Jeff Teague are a wash, and this bet is my belief that it isn't. There are other factors, too (like that I think Vogel was a good coach), but it boils down to that.

The real concern here for me is if Paul George has a bounce-back year, which wouldn't be all that weird given the serious nature of the injury he came back from. But part of the reason that George underperformed last year was that he played a lot of power forward, and if he moves back to small forward, it's not like there is a monster power forward sitting on the bench to take those minutes.

Arturo came up with a simple equation on Twitter that I find oddly satisfying: No Kobe + No Byron + Luke Walton = +10 wins. And this seems about right to me. Kobe was the league's worst player (editor's note, Emmanual Mudiay, and Markieff Morris would like a word), and Scott, the league's worst coach. There is still the Nick Young problem with this team, but I really like the improvements we are likely to see from its young core (especially Larry Nance Jr).

I think Loul Deng may be overrated, but unlike last year's wing players, he belongs in the NBA. And Calderon is a solid addition to the bench. I know he can't defend, but he can shoot, and he doesn't turn the ball over, both pretty good attributes for a back-up point guard. Mozgov and Robinson will also add some nice depth. I don't think 30+ is unrealistic for this team.

I kind of didn't want to touch this one; I think the line is pretty close. But at the end of the day, this team is Otto Porter, John Wall, Marcin Gortat.....and a house of cards (no, I do not think Beal is a good player, at least not yet). All of them have significant injury history and Wall is recovering from multiple knee surgeries as we speak. It wouldn't shock me at all if this team won 42-44 games, but I just couldn't find a believable scenario where they win 45-50, so the under seemed like a good idea. I suspect we'll sweat it all year.

Charlotte Hornets OVER 41.5 and to win the Southeast

I think this is the best bet on the board. I really like Charlotte this year. The losses of Jeremy Lin and Al Jefferson aren't going to hurt nearly as much as the mainstream thinks. Losing Courtney Lee will have an impact, but a full season of Michael Kidd-Gilchrist will more than make up for it. The roster is full of capable players, some of them young and still improving. This team won 48 games last year and didn't really get any worse, so I think the 41.5 over/under is very pessimistic.

The division odds seem perfect for what is essentially a two-way race for the title with Atlanta.

Ok, first of all, this is a bad NBA team. No question. And betting the over on bad teams is always pretty iffy, but there are several mitigating factors here:

I suspect that we will, ahem, sweat this one all year.

Derrick Rose was one of the worst players in the NBA last year. It doesn't matter if the Bulls got the good Rajon or the bad one, either way, they got an upgrade. Losing Noah and Pao may have hurt a little, but here at BSG we are big Robin Lopez fans (seriously, Chicago, you're going to love this guy), and I like the chances of Bobby Portis having an "I figured it out!" year.

There's a lot of gamble around Wade's knees, and there are real issues with spacing and the personnel fit with Hoiberg's coaching style, but I still think 43+ is easily in the cards here.

This roster is old. Man is it old. And NBA players do not age like wine; they age like milk. That is to say, when they go bad, it's generally not a gradual decline. One day it's fine, and the next your whole fridge stinks.

Then we include the fact that the team's best player is coming off an Achilles injury, and Achilles injuries are nasty. I like Brendan Wright, but apparently, no coach in the NBA does, because he never cracks 20 minutes a game. Parsons is ok, but here's another guy that has had two knee surgeries in two years.

On top of all that, Joerger was a good coach who took the rap for a bunch of things out of his control, and Fizdale is not likely to be an upgrade. This roster just seems paper-thin and brittle. And finally, I have to believe that at the first sign of underperformance, management will start to ask themselves whether they should blow it all up.

So there you have it! We'll be checking back at regular intervals to see how I'm doing.