Editor's Note: the original version of this post compared Usage, which is a per-minute stat to Time of Possession and Touches on a per game basis. Thanks to commenter Bjorn for pointing this out. The plots have been updated.

Welcome to Stats 101, a bi-weekly column where I like to talk some broad NBA stats topic. This week's topic will be on the Usage statistic, and why it is now obsolete. Usage is one of the most commonly used "advanced stats" in basketball. Today I break down the basic problems with it and why newer metrics  have  rendered it all but useless.

What is the Usage statistic?

The easiest way to explain this number is – it’s the percentage of possession a given player on an NBA team “ends.” A possession ends in one of two ways – a player takes a shot -- free throws count, or a player turns the ball over. Usage is just the ratio of a given players shots and turnovers compared to their team's.

Like many “advanced stats”, the Usage statistic is a popular one that many don’t understand and often use incorrectly. Usage is commonly used as a proxy to estimate how often a player handles the ball. This is flawed, which we’ll get to shortly. Additionally, people misunderstand that the Usage statistic, on its own, is neither a good or bad indicator of a player. Since it is only telling you how many shots and turnovers a player has, it’s not possible to know if that’s a good thing. For example, Kevin Durant having a high Usage is very good given his shooting efficiency. High Usage can also be bad a thing – for example, DeMarcus Cousins turns the ball over a lot and does not shoot very efficiently.

What’s more, many possessions end because of multiple players. Assists record this, and Usage only accounts for the shooter, not the passer. As they say, it’s takes two to Alley-Oop, and ignoring the passer when accounting for how possessions end is foolish.

Why is it obsolete?

The box score is a very good dataset for modeling performance. Compared to other sports, the NBA’s box score stats are among the most predictable and consistent for players. This suggests that the stats recorded to individual players are, in fact, skills, and not just recording “what happened” in the game. That said, the box score is limited in what it records. In fact, Usage shows this. The box score only records “possession ending” statistics and does not tell us what happened leading up to that. The way many use Usage, they are attempting to infer how much a player was holding the ball. This led to the now infamous “Usage Curves”, first introduced by Dean Oliver in "Basketball on Paper". The notion was – as a player’s Usage went up, their shooting efficiency would go down. This does not match reality, and a large part of that is that Usage doesn’t record what people think it does.

How do we know?

In 2013, the NBA installed cameras in every arena that recorded many more actions. This technology was called SportsVU. SportsVU provides us with the exact data many attempt to use Usage for – namely how often players handle the ball. The two most obvious stats are Time of Possession, which is how long a player holds the ball for in a game, and Touches, which is how many times a player touches the ball in a game. Here's a rundown of said data for last NBA season. 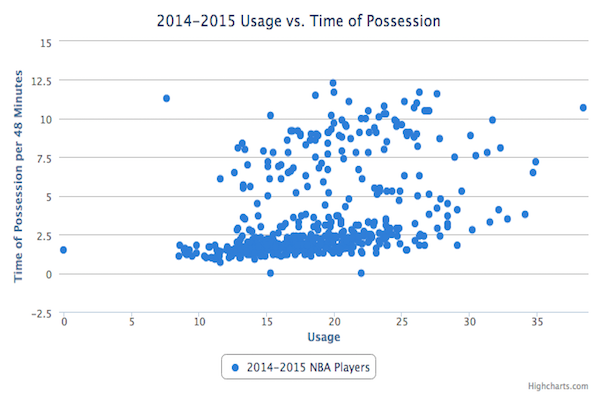 In regards to time of possession what should be become immediately obvious is how much Usage can vary across players that hold the ball for the same amount of time. For instance, Ricky Rubio, Chris Paul, John Wall, and Russell Westbrook all held the ball for over seven minutes a game last season, yet their Usages vary dramatically. It's worth noting that Usage does correlate with Time of Possession (0.394) but, it's pretty clear it is not an acceptable proxy. 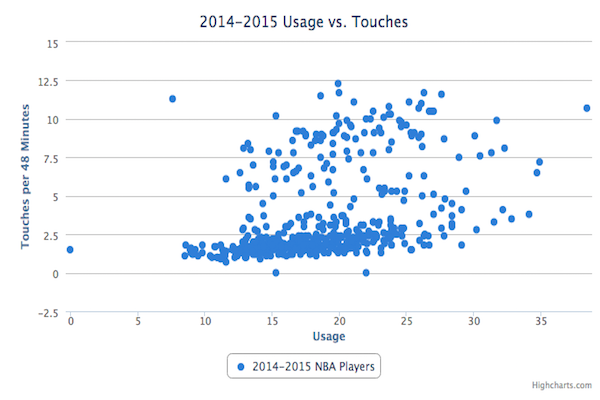 Touches, which correlate very highly with Time of Possession (0.808) pretty much confirm the same story. A player can get the ball many times in a game, but that doesn't guarantee they'll be the one to end the possession. Touches have a slightly better correlation with Usage (0.448), but again, it's still not a good proxy.

A Final Note on Stats

A common issue I see in the era of "Advanced Stats" and "Big Data" is a plethora of metrics being used. A key question I don't see many asking is: "What is this metric used for?" Usage does answer a question: "How many possessions does this player end?" but on its own that question doesn't do much. And as we can see, it doesn't really work to attempt to answer the question: "How much does my player handle the ball in the game?" And my only hope is that this post makes a few more people wonder when they see various stats thrown about, what they actually mean and what they can actually answer. Seeya next time!

Data for Usage from basketball-reference.

Data for Touches and Time of Possession from stats.nba.com