Rudy Gobert and other MVP Snubs 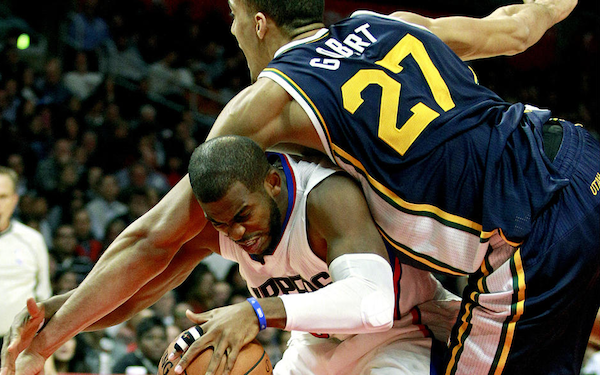 As Papucar noted in the comments recently, this year’s MVP, in a fair world, would go to Rudy Gobert. At this point, he’s exceeded twenty wins according to our numbers. If you’re one of those that believes the boxscore doesn’t evaluate defense well enough, those numbers only help Gobert’s case.

The Jazz currently have the third best defense in the NBA, and according to stats.nba.com, Rudy Gobert contests the most shots in the league at 10.2 per game. And, what’s more, his opponents shoot 43.1% against him! The only player with “better” numbers in decent playing time is Lamarcus Aldridge (42.7% on 5.5. Shots a game) In short, the boxscore loves Gobert, the defensive numbers love him, and on a top four seed out West, I’d say he rightfully deserves some MVP love. Of course, I expect his total vote total to be somewhere around 0. In fact, I’ll posit that if a Jazz player does get a vote for MVP it’ll be Gordon Hayward (who also got an All-Star berth this season!) Anyway, to honor Rudy Gobert, who will be snubbed on MVP love (likely for years to come) let’s go over some other MVP snubs.

Shawn Marion is one of the best forwards in NBA history. Sadly, he’s never quite gotten the respect. Sure, four All-Star games and two All-NBA teams (both 3rd) isn’t nothing, but sadly even in his best season he never got much love. He has 0 MVP votes in these seasons, but we recognize his skill!

It was bad enough Derrick Rose took the MVP from LeBron in 2011, but Dwight had, arguably, his best shot at MVP that season too (he placed 2nd in voting). In his prime Dwight was a 20-10 machine that was winning defensive player of the year awards. It’s not like people don’t accept he was MVP-worthy, he just never picked one up. That’s a shame!

The MVP favors offensive players. Dikembe never scored over fifteen points a game after his rookie season, and thus never had a shot at the MVP, despite having three seasons where he played at MVP level (IBM woulda given him one!). The 2001 is salt in the wound as Allen Iverson took down the award. Oh well!

Jason Kidd came close to the MVP in 2002, losing out to Tim Duncan. Similar to Dwight, I don’t think Kidd is an overlooked great. The stars just never aligned for him to win an MVP. At least he got a ring before he retired.

A few things. First, Rodman’s 1992 season is absurd! Rodman is the only player to crack 1,500 rebounds in an NBA season outside of the 1960s! Obviously like Mutombo, Rodman’s scoring was always going to keep him out of the MVP scene. Still, in a league where “defense wins championships”, you’d figure a two-time Defensive Player of the year, seven-time All-Defense first team would get more love. He had no shot in 1994 or 1998, but I will argue that despite their greatness both of those MVPs kinda felt like lifetime achievement awards for Hakeem and MJ.

Chris Paul is one of the greatest point guards in NBA history. A large part of his MVP snubbing comes from spending a lot of his career on a mediocre New Orleans squad. Of course, he was robbed in 2008, where he lost a close race to Kobe. His ship might have sailed, but we know he’s one of the greatest there’s ever been.

Much like Mutombo and Rodman, Wallace never stood a shot at winning the MVP. He did get one first place vote in 2003 at least! With Detroit Ben Wallace won four defensive player of the year awards and helped them to five conference finals. Here’s hoping that’s enough to get him first ballot Hall of Fame honors.

Stockton ended his career first in assists and steals in the NBA. He also ended 44th in points, with a 38.4% three-point shot! Given the names he “lost” to, it would be easy to say the competition was just too rough. That said, Stockton never cracked top five in MVP voting! In a bit of irony, Stockton was from an era where the strategy was to get the big man the ball to score. In the modern NBA, he might be given more a green light to shoot and he’d have the MVP instead of Malone.

Well, that’s our list! Do you agree on all of our snubs? Any of them? I do like John Stockton as a fun view into a different era of the NBA. We’ll see if the NBA pendelum swings over the course of Gobert’s career.