Alright, we're going to aim to be back to more regular content, so here's a post on Kevin Durant! Also, we're going to try and keep you informed of our podcast schedule. Brian and I will be recording our weekly show at twitch.tv/nerdnumbers tonight at 9:30pm EST if you want to tune in live. Last note, it's still a work in progress but we've got the start of playoffs Wins Produced numbers up now too!

With Kevin Durant cruising towards a second NBA Title and the likely favorite for a second Finals MVP, I've seen some revisionist history about both the NBA and Kevin Durant. Let's talk about that. 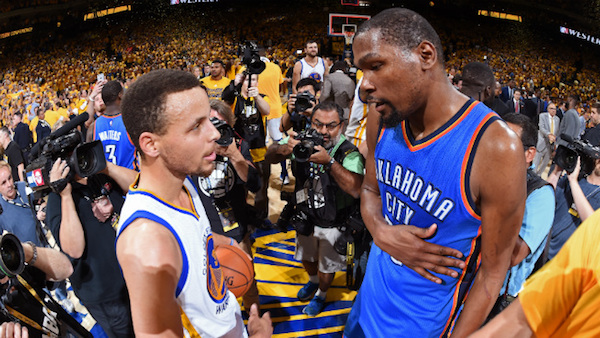 In 2016 the Thunder, inexplicably had the Golden State Warriors, the best team in NBA history, on the ropes. The Thunder had a 3-1 lead behind Kevin Durant and Russell Westbrook. But the Thunder "wilted" and then, somehow, so did the Warriors in the NBA Finals. In the offseason, Kevin Durant "cowardly" jumped ship to play with the Warriors. Much like LeBron did for The Decision, Durant got a lot of backlash for this. The rich got richer, and parity in the NBA was in danger. Won't someone think of the children?

Kevin Durant went on to win a Finals MVP in his first season with the Warriors. And now the Warriors are heading back to their second NBA Finals with Durant. Thanks in part to some silly off-court antics, Kevin Durant has received his fair share of criticism. But Durant's move to the Warriors wasn't as simple as one offseason move. It had many moving parts, and, in my opinion, some bigger villains. Let's start going back over that.

Also, if you don't have it bookmarked, check out Larry Coon's NBA CBA FAQ if you want even more analysis of how the NBA salary cap structure works. 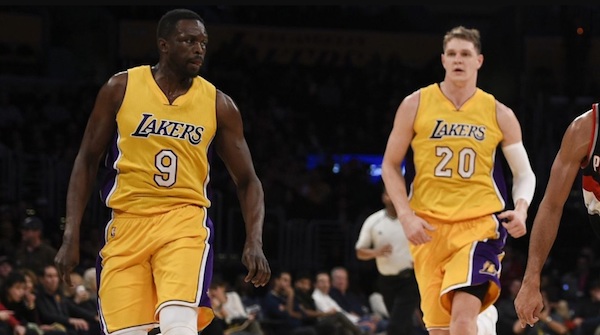 Every team got money. Some spent it better than others.

In February 2016, the NBA signed their new TV deal, which was set to take effect in the 2016-2017 NBA season. The deal was worth roughly $2.66 billion per year. And the key behind that is the way the NBA pays their players is via basketball-related income, and television revenue counts! And the NBA also limits how much teams can spend via a salary cap (more on that in a bit). But where this gets fun is that the way most NBA contracts were structured, only players on "max contracts" would see a raise as a result of the new income, because max contracts are percentage based. Players signed to standard NBA contracts would not get a raise. As a result, in the 2016-2017 NBA season, virtually every NBA team saw a massive influx of cap space that they could spend.

Of course, this deal was a long time coming. While the NBA signed this deal in 2016, anyone that cared about NBA salary caps (like, say, NBA front offices) could see the huge raise coming. And that meant, for teams planning for the ideal world of 2016-2017, having good contracts was key. The Warriors were lucky in that injuries early in Steph Curry's career meant he signed a favorable contract through 2016-2017! And that brings us to Klay Thompson. 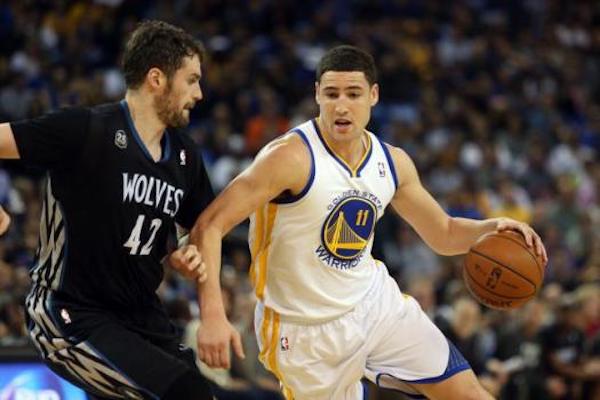 We've perpetually thought Klay Thompson is a fantastic scorer, but not a top level player. Public perception has not matched this. For instance, at one point, a healthy Kevin Love was on the table for Klay Thompson! But the Warriors stood firm in not trading Klay, and there might have been a good reason. In 2014 the Warriors signed Klay to a costly deal for roughly $16 million a season. The key, though, was that they didn't give him a max contract. So for two years on the old TV deal, he was getting "overpaid," but when the new TV deal effect, suddenly Klay was giving the Warriors a discount, and he was doing it on a year where having extra cap available was vital.

Now, while we'll never know if the Warriors might have spent the money foolishly had Durant not been available, it is clear they explicitly forecasted the NBA salary cap future and ensured their players were on good contracts to capitalize. Typically when a star is free, only a few teams have the cap available to pursue them. And it's also tough for a contender to attract them due to a usually full salary cap. The Warriors had a great team in a good market with the cap available for Durant. Now let's review another critical set of stories about Durant's decision. 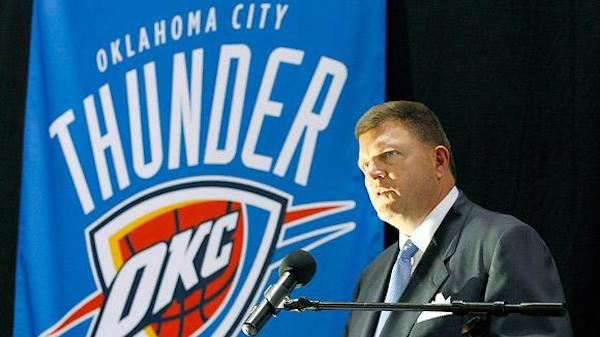 Clay Bennett purchased the Seattle Supersonics in 2006 and said he planned to keep the team in Seattle. With the benefit of hindsight, it's fairly obvious that this was a lie (Patrick's note: It was obvious at the time for those of us in Seattle, too). In their remaining years in Seattle, the Sonics tanked hard. However, in perhaps the only existing example (so far?) of "the process" working, they drafted terrific players back to back in Kevin Durant and Russell Westbrook. Regardless, Bennett lucked into a Durant (which he shouldn't have, read about that amazing story here), and then proceeded to dismantle the Sonics around him. That said, with a fantastic core of Westbrook, Harden, Durant, and Ibaka, the relocated Sonics (now the Thunder), looked like the next big thing. They made the NBA Finals in 2012, before falling to LeBron James and the Heat. And then things got worse.

I've written about this at length before, but the Thunder's decision to move on James Harden is one of the most boneheaded in NBA history. And part of the logic the Thunder had was money constraints ... because they were a small market team! To recap - Clay Bennett bought a team in a big tech market and lucked into one of the greatest players ever. He then moved that player to a worse market, put great players around him, and then let some of them walk over money. So when Kevin Durant's contract was up, he, oddly, chose to go to a big tech market surrounded by some great players. 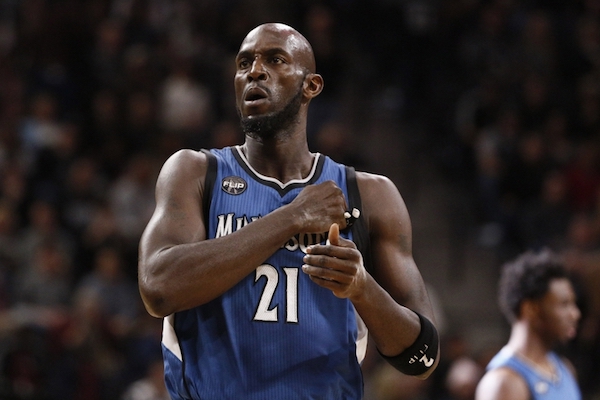 Alright, last history story, I promise! In the 1997-1998 NBA season, the small market Minnesota Timberwolves paid Kevin Garnett a six-year $126 million deal. In 1999 the NBA had a lockout, and one of the sticking points for the owners was to limit how much teams could pay individual players. In part, this may have been a response to Kevin Garnett's massive deal. While this number has risen with the NBA's basketball-related income over the years, the NBA still caps player salaries. And it's why the Warriors could offer Durant a comparable deal to what the Thunder and other teams could. It's speculated thanks to Bird Rights, etc. that Durant left $8 million a year on the table signing with the Warriors. However, when you factor in market size, playoff success, etc. it's likely this was closer to a push. So, let's tie all this history together, but in chronological order. 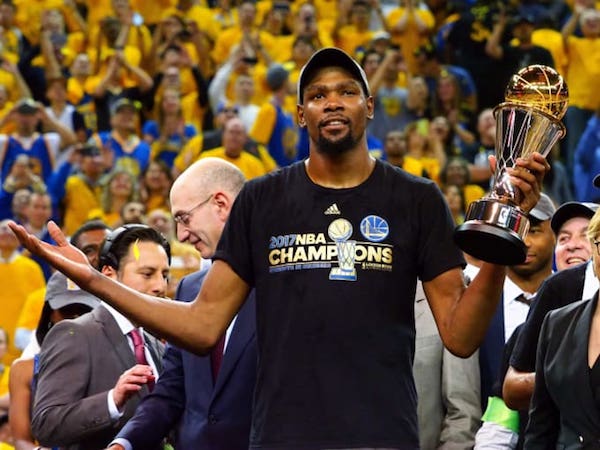 In 1995 a small market team lucks into one of the greatest Kevins in NBA history. To convince him to stay they offer him a huge payday in 1997. However, in 1999, the NBA adds rules that restrict how much teams can pay their stars.

In 2007 the Sonics, a big market team lucks into one of the greatest Kevins in NBA history. However, they then move to a small market. They also make questionable personnel moves while Kevin Durant is under contract with them. This happens right when the NBA is about to change the amount every team can afford to throw at free agents. The Warriors, a good team in a good market, freed up cap space ahead of time for a big name offseason. And shocker, Durant chose to go to the best team in the NBA.

We're big fans of behavioral psychology around here, which talks a lot about how people respond to incentives and small nudges. And one story is that a selfish Kevin Durant made a "cruel" decision. Another story is that a bunch of billionaires put rules in place that influenced how much top players could get paid. And then one billionaire saw those rules and made a very attractive spot for a player like Kevin Durant. And another owner, well, did not. And when given the option between those two spots, Kevin Durant picked the one almost any "rational actor" would. So when it comes to pointing fingers as to why Kevin Durant ended up in Golden State, I'd say there are several owners that it would make more sense to blame than Durant.