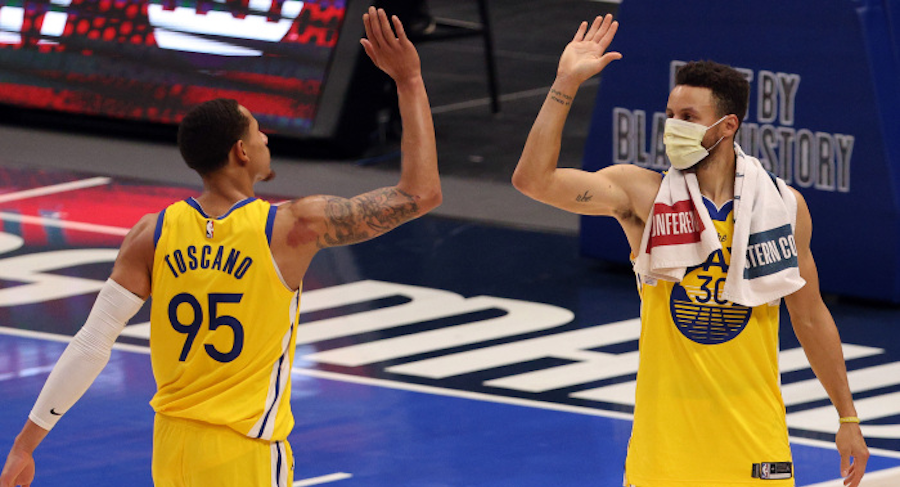 A lot of moving pieces happened during this trade deadline. And we definitely have to talk some -- are the Nuggets contenders again? But one team intrigues me. A team we just can't quit. Back when there were tons of trade speculations, an obvious question was -- "How can we improve the Warriors?" We're against wasting a year of Curry's prime. Last year was unforgivable. And when I looked at the Warriors, an oddly obvious thing stood out. As of this writing, 03/28/2021, here are the Warriors top six players sorted by their Wins Produced:

One of the most important pieces on the NBA came from Arturo Galletti in 2010! Namely, a team's playoff success lies with their top six players. Amazingly one of the strongest teams with one of the best players ever forgot this in back-to-back seasons! While it makes a lot of sense, getting a deep bench to have contingencies if players get injured, something the Warriors are dealing with. The key is to have six strong players come playoff time. And the good news? The Warriors have it! They have an MVP caliber player and a solid supporting staff. LeBron James reached the Finals with less!

The Bad News Part 1: That's Not What They're Doing

The default order for sorting players on this site is wins because, well, that's what we care about! But here's how the Warriors look if we sort by minutes played:

Kevin Looney doesn't even crack the Warriors' top 10! The Warriors are an enigma to many this season. They have a great defense and an MVP player in Curry, but a losing record? The answer is they have a great team wrapped inside of a terrible team. Wiggins, Oubre, and Bazemore are bench-level players getting major roles on the Warriors. Wiseman and Paschall are horrendous and costing the Warriors serious wins. And the Warriors are playing these guys instead of a strong playoff squad.

And the bad news is it is hard to believe the Warriors would reverse course. Toscano-Anderson and Lee are minimum salary guys that were picked up on two-way contracts. Kevon Looney was a late first-round pick that can't stay healthy. Compare that to Andrew Wiggins, who is on a max contract linking back to Kevin Durant. A move the co-owner of the Warriors was defending last season. Compare that to James Wiseman, a top draft pick that the Warriors were not-so-subtly tanking for. It's possible the Warriors management could let go of bad decisions to make a winning squad. I wouldn't bet on it. Sadly, that's not all.

I mentioned Looney couldn't stay healthy. As of this writing, Curry is out injured for at least another game, and Draymond Green missed a game to injury, returned, and didn't look himself. Curry and Draymond are on the wrong side of 30 with tons of wear and tear. Kevon Looney is young but also has wear and tear. If the Warriors could make sure all of them were healthy enough for the playoffs and could guarantee they'd get full playing time? I'd be sold on the Warriors as a Darkhorse. As is, if the Warriors falter a little more, I wouldn't be shocked if they ask Curry to shut it down and try and add another Wiseman to the squad.