How the NBA made their draft lottery problem worse

We're an anti-tanking website. Our logic has always been that the goal of any NBA team in any season should be the playoffs at bare minimum. We're also of the belief that a combination of available good players and trade opportunities means any NBA team should be able to make the playoffs. Of course, luck can hit any team, so enough injuries can derail even the most promising NBA seasons. We'll get to that in a second. Regardless, the plan to "give up on a season" has never sat well with us, and the NBA recently changed their draft lottery rules to help fix that.

Now, the worst three teams in the NBA have a 14.0% chance of the number one pick in the NBA draft. In previous years the odds at the number one pick was 25.0%. Even the third worse team had a 15.6% chance. By flattening the top, the NBA has made it much sillier for a team to attempt to emulate Sam Hinkie's process. But here's the thing, the odds were already bad a few years ago. A 25% shot at the number one pick was horrendously low. In our opinion, it was already irrational to give up a season for tanking purposes. So while making the odds worse would seem like it would curtail that behavior, the simple fact that the incentive exists is enough for tanking teams to exist. If it is already irrational to tank, then why would you fix it by appealing to teams rationality?

But here's where it gets worse. By flattening the top, the NBA made the incremental gains from losing games more valuable. As we've said, giving up an entire season is folly. But what about another scenario. Let's pretend it's after the trade deadline. Let's say some of your top player's have been injured. Let's say your odds of making the playoffs are non-existent. At this point is it irrational to rest your stars and start planning for next season? We say no. And the NBA just added a big incentive to do just that. Here's a chart of how a team's draft lottery position relates to their shot of acquiring the number one pick, and we can notice a very stark difference from last year. 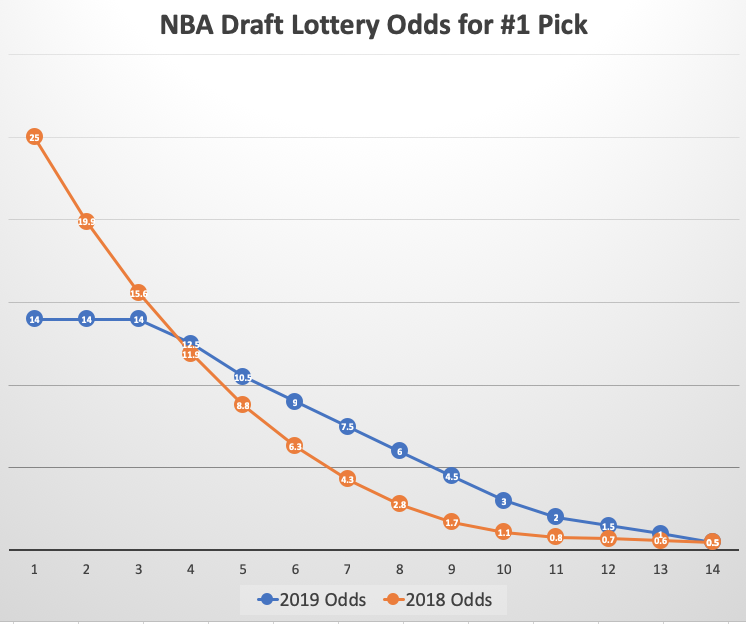 Let's use the Lakers and Pelicans as examples. Both of these teams have one of the top players in the NBA (LeBron James and Anthony Davis). As of this writing, according to basketball-reference's playoff probabilities, these teams are out of the playoffs in all but the mathematically guaranteed sense. Right now the Lakers are 10th in the draft lottery odds, and the Pelicans are 13th. While neither team has a shot at getting close to top 5 in the draft lottery (five teams have won below 25 games this season!), every additional loss is much better for their draft odds.

Last season the Lakers would have a 1.1% shot at the number one pick. If they moved up three spots, they'd only have moved their odds to 4.3% to win the number one pick. Now first off, the annoying part is, we'd still think such a move was rational. Given that their playoff chances were done, and their best players are beat up. We'd say it would make perfect sense for the Lakers to get healthy for next season, and up their draft stock. The problem is the NBA has made such a move even smarter. If the Lakers move up three spots this season, their odds jump to 7.5%! As noted, it's likely the top five worst NBA teams are set, but there is a cluster of NBA teams with 27-30 wins, and the Lakers are one of them. Every loss for any of these teams moves up their playoff odds, and this year the NBA decided to make how much each loss is worth even better!

The league has been upset with the Pelicans for attempting to shut down Anthony Davis this season. But they also changed the rules this year to say - "If you have a star, and you're out of the playoffs, it's much smarter to sit them." People respond to incentives! One of the most popular sets of books, the Freakonomics series, discusses this exact point. The NBA changed the rules to make it less rational to give up on an entire NBA season. But they made it much more rational to "shut it down" if your NBA season went awry and your playoff window was shut. In short, the NBA's "solution" to the draft lottery was the exact wrong way to try and incentivize teams. And if the NBA is upset by this, they should perhaps change the rules to not incentivize this exact type of behavior.

There is only one "out" for fans of the NBA. LeBron James is no spring chicken. My belief is his goal is to finish his career as the all-time NBA points leader. He doesn't likely want to miss games where he can still meaningfully add to this. And it would be foolish of the Lakers to make LeBron James upset in regards to this. But outside of that? There's no reason for the Lakers to keep trying this season. And honestly? It pisses me off that I have to agree with that.