Dre and Brian are back to talk NBA off-season, especially the hapless Kings, and more on racism and rich people.

You can watch us live at twitch.tv/nerdnumbers almost every Monday at 9:30pm EST.

David Lee's time in Golden State ends not with a bang, but a whimper. On the plus side, it gives us a chance to bash the "small ball" meme.

Fun note, if we adjust by minutes played, the 2015 Warriors are a slightly taller team than the 99 Spurs, who had the two towers of David Robinson and Tim Duncan.

Also worth noting that calling Draymond Green "small ball" is a bit misleading. He's a 230 pound player with a seven foot two wingspan! Check out The Sports Gene for great information on that. And for the millionth time, it's not about playing small or big, it's about putting productive players on the floor! A four that can stretch the floor that can't shoot isn't useful!

We talk David Lee's "lack of defense". The reality is, a lot of David Lee's skills are redundant on the Warriors. That's not David Lee's fault, and I find the arguments against his defense somewhat spurious. Regardless, I think it was a good move to get David Lee to a team where he'll get minutes and to get the Warriors a good bench player.

Brian points out that James Michael McAdoo put up David Lee production last season, albeit in limited minutes. He's done well in Summer League, so the Warriors are fine.

The comment thread on my Trainwreck piece was fantastic. It "devolved" into arguments about Water World vs. Mad Max, and if Bruce Lee was overrated. Love it!

The WWE fired Hulk Hogan for racist statements he said in a leaked tape.

The issue I have is that the WWE has had major issues with racism for years.

Grantland had a great breakdown of WWE's issues with race.

Colin Cowherd is out at ESPN after insulting Dominicans. Sadly, I feel both he and Hulk Hogan are just scapegoats. It allows the networks to "take a stand" against racism while not fixing pervasive issues. In Cowherd's case, his contract was up, so this is a convenient way to get him out sooner. In Donald Sterlin's case, it allowed the NBA to remove him as an owner. In short, I'm even more jaded as some of these "stands again racism" seem to be convenient political maneuvers.

Pedro Martinez was excellent on the field and is still awesome!

Donald Trump is to me, the "trump card" in the racism argument. Namely an entitled rich person can be very racist and really can't be stopped. He's one of the GOP front-runners right now!

Dean Oliver is in the opinion of many, including myself, one of the best basketball analytics minds out there. And as such, the Kings recent moves with him are inexcusable. Kevin Draper broke down just how bad things have been in Sacramento.

I don't buy that Vivek Ranadive knows what he's doing. That's depressing given how he entered the league.

As promised, here's the image of me meeting him years ago at Sloan. 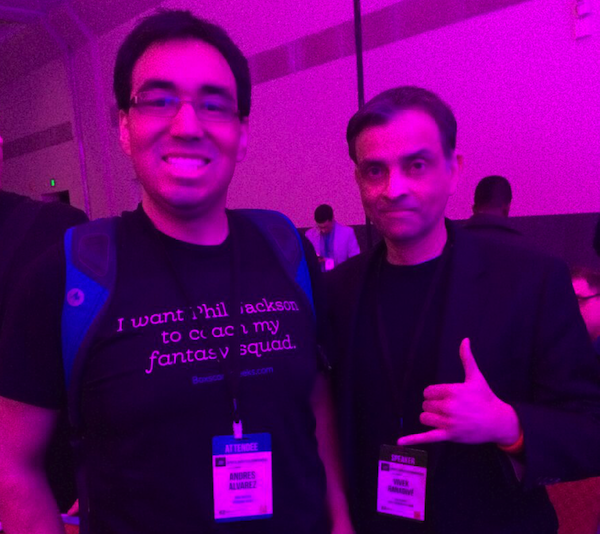 Tom Ziller also had a good breakdown of how bad the Kings were a few weeks ago.

We break down the NBA moves of the last week. Tune in for an exciting discussion of shuffling deck chairs!

Brian shouts out the city of Boston for turning down the Olympics. Yes! We approve not wasting public funds on sports. Reminder, Sochi was billions over budget!

Brian shouts out Josh Smith for making a correct statement. We agree it might anger you to hear his comments, but if that makes you mad, you should be furious at owners.

We give Becky Hammon a shout out for winning Summer League. I'd love to see her pull a Pat Riley and take over the Spurs in the near future and win a title in her first year.

Curtis Harris gets a shout out for this gem.

@NerdNumbers I'm awaiting, "WWE surprised to find out it's homoerotic"

Marc Lamont had some fantastic tweets about the WWE and racism. A good person to follow.

And they pick the champ based on the values and preferences of their base. That doesn't negate racism. https://t.co/30oatjyJzC