The Draft is here, and the question on everyone's mind is: which teams will get the players that will ensure a bright future? The reality? Few – if any – of these players will be very productive in the near future. That said, some very talented people – Dave Berri and Ari Caroline – have put together some excellent analysis on the performance of many of the incoming players. So if you'd like some extra information to make you feel better (or worse) about your team's draft night decisions, read on!

Dave Berri (@wagesofwins), professor of Economics at Southern Utah University and the founder of the Wages of Wins, has calculated the Wins Produced for all of the NCAA Men's basketball players this past season. While a player's college production does correlate with their NBA production, the reality is that it still doesn't explain over half of what ends up deciding how they fare in the NBA. It's possible for players with good college numbers to be busts – hey there, Michael Beasley! It's also possible for players with subpar numbers to blossom – hello Andre Drummond! In short, these numbers aren't a seal of approval or a crystal ball. Rather, consider these transcripts that players bring to a job interview.

Again, Dave went all out with the numbers. Long-term, we'll definitely look into creating a page to be able sort and search these – just like our NBA Players page. Until then, I've decided to look at the top 25 players (according to Wins Produced per 40 minutes) at each position. I haven't filtered out players that have returned to school, meaning these are the "Dean's List" of players from last year's NCAA season.

As I said before posting all these numbers – thanks again Dave! – these are not written in stone. Things like age, height, strength of schedule, etc., can impact how a player looks. Smart people like Arturo Galletti and Layne Vashro have made models that attempt to incorporate such things. And in the end, what gets players drafted will tend towards the more "conventional" stats (i.e. points and being on a winning team). That said, the players above have performed very well in what is basically the NBA's minor league. On draft night, many teams will be looking for new players, and here is a good place to start.

Ari Caroline (@aricaroline), Chief Analytics Officer at Memorial Sloan-Kettering Cancer Center and someone who has also done some amazing basketball research in the past, had some fun research to pass along as well. Below is a graphic showing age-adjusted production per 40 minutes for Draft Express prospects. Other than having Frank Kaminsky a little too low, I think it's an amazing chart. 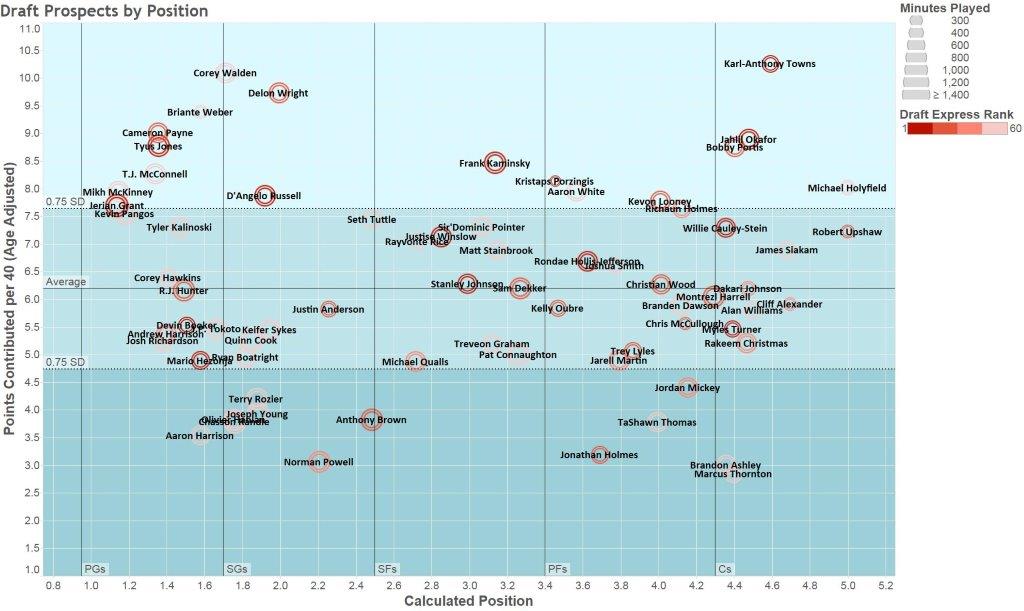 So there you have it! All the tools you need to look at your favourite team's upcoming draft selections and proclaim "they have all the skills to maybe be a good or bad player in the NBA!"